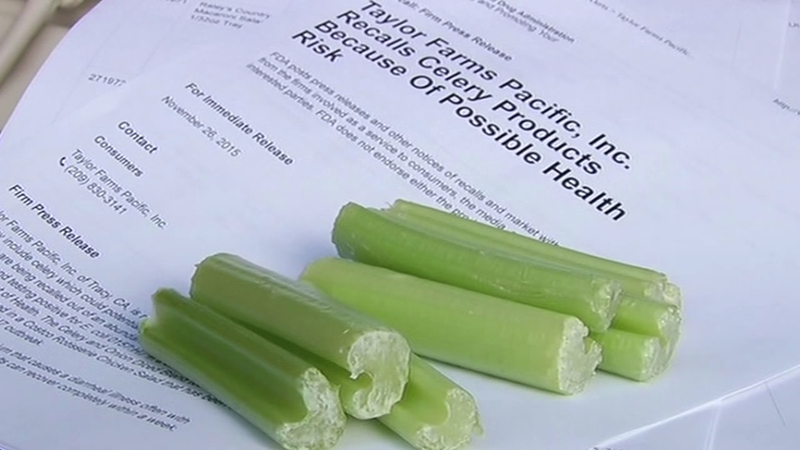 SOUTH SAN FRANCSICO, Calif. (KGO) -- A recall from an E. coli scare has now expanded to several states and more than 155,000 items. The culprit is the celery sold by Taylor Farms Pacific in Tracy.

The tainted celery was traced back to Taylor Farms in the Central Valley and they say they expanded their recall out of an abundance of caution.

The E. coli bacteria first appeared in mid-November in a chicken salad made with an onion and celery mix sold at Costco. But their celery has been used in wraps, sandwiches, cornbread stuffing, vegetable trays and other items.

According to the FDA, more than 155,000 items have now been pulled off the shelves. These products have been sold at a number of top grocery stores.

"That's even scarier because you don't expect it in celery. You expect it in meat, so that's very frightening," shopper Denise Roa said.

This particular type of E. coli, called O157:H7 is very dangerous because it can result in kidney failure. So far 19 people in seven states have been sickened.

"That's real bad. I would not want to eat nothing like that, let alone have my family eat something like that. I think it's good to get it recalled," shopper Kie Mixon said.

Shopper Kevin Mitchell says he now only buys his fruits and vegetable from local farmers. He told ABC7 News, "We don't really know the source, but yeah, the fact that we are so distant from our production, we just don't know, we can't trace it to is it they're method using, is it the lack of safety?"

The Centers for Disease Control reports one in six Americans gets sick every year from the foods they eat.