A Riverside mother is hoping that store surveillance video of a theft will produce a suspect and raise awareness about a new fraud sweeping the country.
KABC 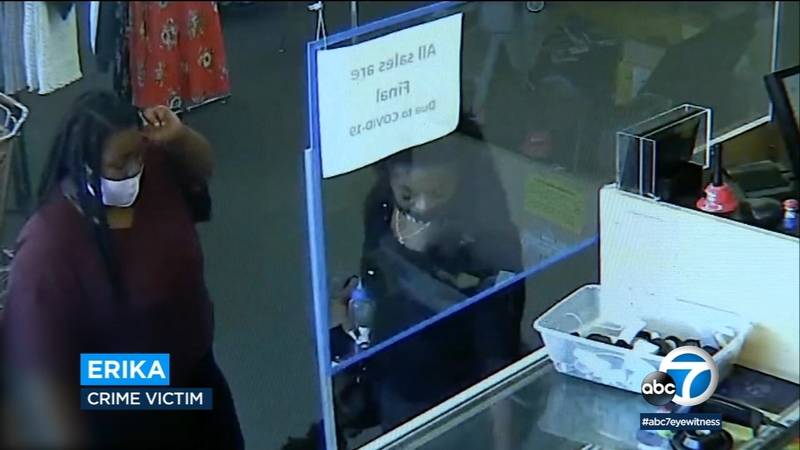 RIVERSIDE, Calif. -- A Riverside mother is hoping that store surveillance video of a theft will produce a suspect and raise awareness about a new fraud sweeping the country.

The victim had $500 cash, her ID and her social security card inside the pocketbook which was lifted from a counter at a San Bernardino discount store.

The California EDD said that they're in an active nationwide investigation regarding identity theft and fraudulent claims.

"I could barely afford anything as it is. And I work two jobs and it is hard," says Erika, who didn't want to use her last name for fear that the thief would seek revenge for being outed.

Erika's Facebook post went viral as she learned she had become a victim of a more serious fraud.

She and her sister contacted the Employment Development Department and learned that her ID and social security number had been used to apply for unemployment benefits. They say that according to a hotline operator, a fraudster had collected thousands of dollars in a matter of weeks.

The EDD's phone lines are notoriously tangled as thousands of out-of-work Californians try to find out what has become of their benefits. One 7 On Your Side viewer shares her tips for success.

If identity thieves have a significant amount of information, claims can still be processed and paid out before the scam is uncovered, according to an EDD spokesperson.

EDD fraud is growing as criminals find new tricks to get personal information. Los Angeles City Attorney Mike Feuer underscores the fraud warnings issued by the IRS, the Social Security Administration and the Federal Trade Commission about the swindle that is happening across the country.

"Victims may not even learn they were targeted until they apply for unemployment benefits themselves or get a bill from the IRS for taxes they owe on benefits they never received," says Feuer.

The Facebook post had an impact. To Erika's amazement, before the San Bernardino Police Department even started on an investigation, her cards were returned in the mail.

A Florida man says he received 12 letters from California's EDD, all were addressed to strangers but at his address.

"What the heck? What happened? They said 'They returned your ID, social and your cards, just not the wallet.' I was like, wow. Social media did work," says Erika.

To help her recover, a GoFundMe page was set up: "Help Replace Single Mom's Wallet." Even though she works seven days a week at two jobs, she says she can't earn her way out of this one.

Erika says she's baffled at how the scammers were able to get EDD funds so fast. She says her mother filed for benefits months ago with a legitimate claim but so far has not received a penny.