KYLIE IN SF: The lip kit legacy and phenomenon of the Kylie Cosmetics pop-up shop 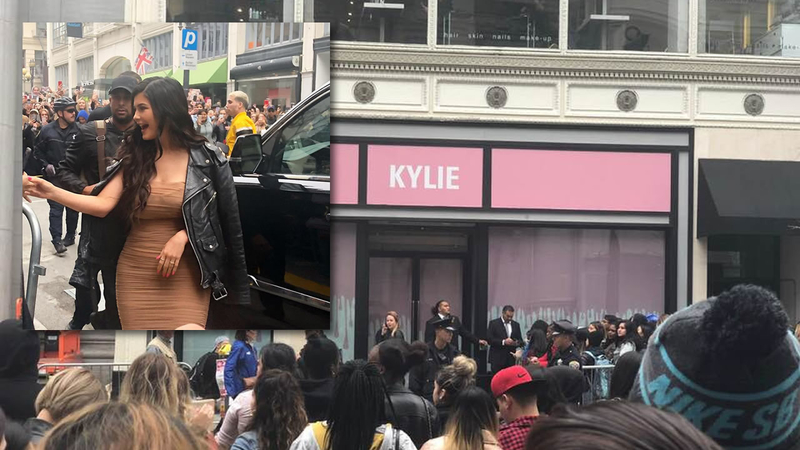 KYLIE IN SF: The lip kit legacy and phenomenon of the Kylie Cosmetics pop-up shop

SAN FRANCISCO (KGO) -- With a splash of pink paint and a dash of sparkle on Grant Avenue, Kylie Jenner made San Francisco makeup junkies' dreams come true as her pop-up boutique began its special run in the City by the Bay.

An unassuming building on the busy street near Union Square was transformed from smudged up glass and "for lease signs" to a palace of teen dreams for thousands of people to get their glam on and spend some coins doing it, myself included.

Brace yourself because you're about to learn all about the legend of the lip kit and why Kylie Cosmetics has become such a huge deal.


A BRAND IS BORN

When Jenner first released her liquid lipstick line in 2016 it set off a chain reaction in the makeup world. Haters and appreciators of the Kardashian-Jenner clan alike put aside their differences and decided, "Man! That's a good liquid lipstick," and an empire was born.

As a journalist who loves to keep their makeup game strong, I was among the first batch of customers to buy her original matte formula. Now, for those of you who don't like makeup, you can just scroll down to the event recap because it's about to get nerdy up in here.

When the line launched, Kylie's team offered up this explanation of why her product was different. "The Lip Kit is your secret weapon to create the perfect 'Kylie Lip.' This ultra-long wearing lip liner has a creamy texture that glides across the lips for a very easy and comfortable application. The extremely long-wearing lipstick contains moisturizing ingredients for a comfortable, emollient and silky feel that does not dry your lips out."

With many brands being panned because of long wear and low comfortability, Jenner made a lofty promise. Of course, I, and thousands of others like me and unlike me, had to try it.

A matte liquid lipstick is really good when it stays on all day and you don't have to touch it up. If that swipe of gorgeous color keeps its cool through your work day, meals and more, you know you've found the perfect fit. For those who live in the world of paint and pampering each day, the perfect lipstick makes you feel like a superhero. There's an added swagger, a jolt of energy that makes you feel like you're doing the right thing at the right time. It may sound trivial, but makeup can move mountains. Just ask a woman wearing a power red lip. She'll tell you.

The first run of her matte formula didn't quite hit that mark, but the three original shades, "Candy K," "Dolce K," and "True Brown K" made us want more -- and so she improved the line. Every release was better than the last. Every piece of packaging was more sparkly and elaborate. Every dollar was sucked out of my wallet.

And I, like thousands of other girls, boys, men, and women across the nation fell under the Kylie Cosmetics spell. The lip kits are by far the best liquid lipsticks I have ever tried. The consistent formula and diverse shade range make them work on a wide array of skin tones and the comfortability factor wasn't a lie. And I can't lie, I'm a lifelong customer.

Kylie could sell ice to a polar bear, but after several years of successful launches including eyeshadow palettes, eyeliner, different liquid lipstick formulas, and collaborations with her famous sisters, and most recently her "momager" Kris Jenner, she proved that her business acumen and line of products were solid gold.

So when the announcement was made that Kylie Cosmetics was coming to San Francisco, thousands of beauty lovers rejoiced for their perfect liquid lipstick would be right in front of them, available where they live.

I’M SO EXCITED! Coming for you San Francisco! The Kylie Pop Up opens this Friday 10am at 21 Grant Ave. See you then ;) I have some special things for you guys exclusive to the store! pic.twitter.com/7DC3sQsGBJ

Now that you're well versed in the history of the Kylie Lip Kit, we can jump to Friday, May 17, 2018 in San Francisco.

The girls and women in line for the pop-up were painted for the gods (that means their makeup was on point) and had more Kylie Jenner knowledge than Google. "I like her because she's a businesswoman," said one fan who drove from Tracey and waited out in the cold for hours in hopes of meeting the star. "I can't wait to see her."

Others didn't feel so enthused. Desire said she started her journey to the event before 10 p.m. Thursday night, sleeping on the street sharing a thin blanket with her friends. "It's kind of disappointing," she said, tossing her perfectly curled hair out of her face. "She should really care about her fans more. If you say you're going to be here at 10, then be here."

She and several others became friends while waiting for their idol.

But after Desire went into the store, shopped, and came out, she looked like a different person, eyes glittering with visions of sparkles and glamour. "How was it?" I asked.

"It was awesome," she said, trying not to smudge the lipstick swatches on her hand. "Did some damage. Pretty worth it actually."

Shoppers came in and out of the store, some delighted, others sad that Kylie wasn't inside.

An SFPD officer held the door open for a gaggle of girls as they scampered on to the street, flashy metal shopping bags in hand. He told me that they brought in overtime units and some officers were pulled off their beats to help control the crowds and make sure everyone stayed safe.

Hours passed, and those who couldn't bear another minute of looking at a long line and a doorway left, their hopes of seeing Kylie dashed.

But around 2 p.m. the barricades were reinforced with zip ties and police closed off half of Grant Avenue to traffic. Almost instantly, droves of young men and women made a U-shape around the store -- a sea of waving arms and screaming faces. Kylie was coming.

A low rumbling of screams turned into a deafening sound, cascading from line to line, each side of the street to another as Kylie Jenner, their idol, rolled up in a black SUV.

The flash of iPhone cameras could have blinded some if it were night. Voices called out:

"This is not happening."

I felt a sudden jolt from behind as dozens of teenagers pushed toward the barricade. They needed to be close to her.

As she exited the SUV and breezed past the throng of fans, I caught a glimpse of her perfectly made-up face. A nude lip and gilded bronze eye are her signature looks and they were in perfect form.

Her sweet demeanor as she waved her perfectly manicured hand from beneath her leather jacket made fans smile and giggle. They were all happy that they came.

Screams and cheers for the star faded as she disappeared into the shop to greet a gaggle of perfectly-timed shoppers. Since only groups of 30 or so were let in at a time, it would be nearly impossible to be in the group that Kylie meets -- those girls were lucky.

When inside, Kylie took pictures with fans and signed merchandise. And then, she was gone.

They say to never meet your idols because they won't live up to your standards. But on a breezy day in San Francisco, the idol exceeded them. Despite being tired, cold, hungry, and now, most likely broke, the experience was worth it for fans.

"I wouldn't take it back for the world," said one girl hugging her mother.

Whether you subscribe to the "Kardashian kraze" or ignore it, you can't deny the power of stardom. When you care about someone, a person or celebrity, you'll do anything to support them. Kylie's fans believe in her, because she gives them something to believe in.

And in a world where tragedy strikes daily and things seem dark at times -- a little sparkle and a chance meeting with your idol can make all the difference.

As Sol Meneses, a fan from Peru who now lives in Belmont said: "Kylie. I love her. She empowers me."

Sol Meneses talks about her favorite celebrity, Kylie Jenner, at the star's pop-up shop in San Francisco, Calif. on Friday, May 18, 2018.

For more on the madness of the Kylie Jenner pop-up in San Francisco, click here.