WABC
By Bill King
NEW YORK -- The tears were flowing on Monday night's episode of the Bachelor, as season 21 star Nick Viall struggled with fears that his journey will not end in love or a proposal.

And fresh off his bombshell confession to the six remaining women that he doesn't know if he can continue in the competition, Viall stopped by to talk relationships, "chokeys" and breakdowns. 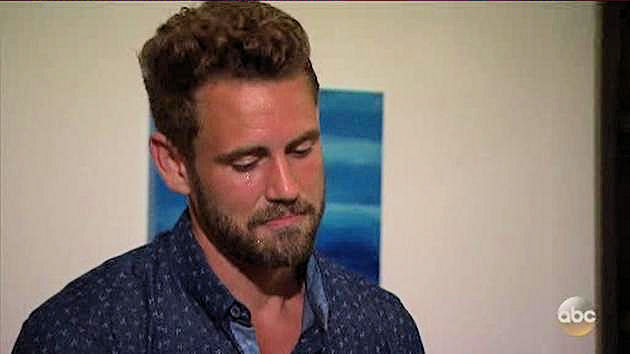 He also weighed in on the possibility of a Bachelorette of color, what it's like to eliminate seven women in a week, and other topics ranging from personal growth to whether Alexis would be a perfect match for Daniel.

After Jaimi, Alexis and Josephine were sent home at the rose ceremony, Nick parted ways with Jasmine, Danielle L. and Whitney during a pair of dates. Worried he might be in for more heartbreak, he paid a visit to the ladies' hotel room to be honest with them.

"A lot of things, I suppose, were going through my head," he said. "Looking back, I mean, I think it's a reminder how emotionally-charged that week was and that moment was."

Jasmine was at the forefront of the drama, when her own desire to be noticed led to her threatening to choke Nick, both flirtatiously, and seriously. According to Nick, the situation was both "scary" and "surprising."

"It can be a very difficult environment sometimes to kind of navigate through," he said. "I think you've seen that a few times this season. I think you saw that a little bit last night with Jasmine. Sometimes that world can get the best of you."

As for eliminating so many women in such a short time, Nick believes that contributed to his escalating anxiety.

"It's never easy sending someone home...it's kind of a downer moment," he said. "It's this kind of an unfortunate situation, but on the flip side, it's helpful because it gets you closer to hopefully finding (the) one."

And when it came to Corinne and keeping her around despite repeated warnings and red flags, Nick relied on his own experience as someone who wasn't always adored by his fellow competitors.

"Their opinions about the other women weren't really anything I was concerned about; I wanted all the women to focus their attention on the relationship with me," he said. "I was someone who certainly was assertive and kind of went for what I wanted...I felt like the things I did in my relationship with Andi and Kaitlyn helped drive those relationships forward, and I think that is similar to Corrine."

Nick also addressed speculation that Rachel could be the next Bachelorette, particularly amid calls for more diversity in the franchise, though he added the discussion is a bit premature because his relationship with her is still ongoing as far as the show goes.

"I am someone who is always a huge advocate of diversity, and I think progress is a great thing," he said. "As far as Rachel goes, individually as a person, I could sing the praises of Rachel all day long."

When asked how he's grown over the past three years, spent almost entirely in the public eye with four appearances on The Bachelorette, Bachelor in Paradise and now The Bachelor, Nice believes he is still the same guy he always was.

II am someone that likes to learn from past experiences, and there's been plenty of take-aways from all my experiences," he said. "But there hasn't been this huge transformation."

He also insisted that the pre-Andi, pre-Kaitlyn Nick was always in similar shape to the current version.

"I actually always had the abs," he joked.

Lastly, he addressed the similarities between Daniel and Alexis, who many hope will be reunited on Bachelor in Paradise Season 4.

"I am huge fan of Daniel, and I'm equally a huge fan of Alexis," he said. "I think it would be a wonderful thing if they both found their way back to paradise."
Related topics:
arts & entertainmentbachelor in paradiseentertainmentbachelorthe bachelornick viallbachelorette
Copyright © 2020 WABC-TV. All Rights Reserved.
More Videos
From CNN Newsource affiliates
TOP STORIES