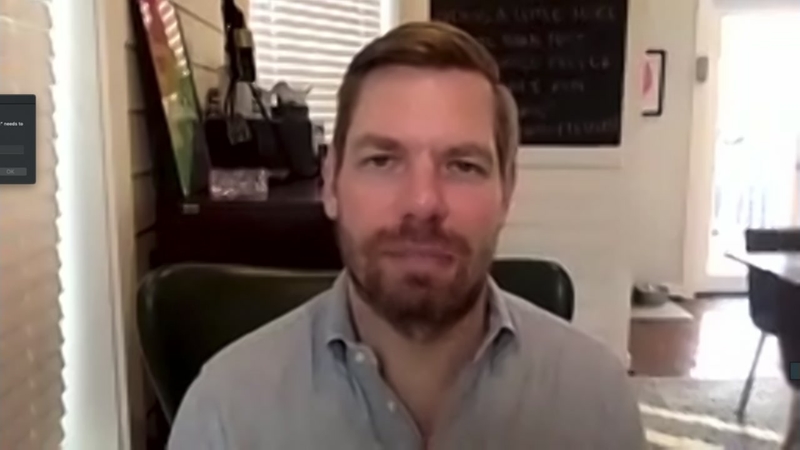 SAN FRANCISCO (KGO) -- East Bay Rep. Eric Swalwell was on the House floor as rioters entered the U.S. Capitol on Wednesday while lawmakers worked to certify the Electoral College vote, confirming Joe Biden as the next president.

The Congressman said he heard pounding on the doors and windows as the violent siege began.

"You started to hear the flashbangs from the Capitol police," he said.

He described in a "Midday Live" interview with ABC7 News anchor Reggie Aqui Friday how he heard flashbangs as police responded.

RELATED: 'He has to be stopped': Bay Area Dems call for removal of President Trump after US Capitol siege

"Ultimately we were told to get out the gas masks that are on the House floor in case tear gas is used in the chamber," Swalwell said.

Since Wednesday's attack, the congressman, who represents Alameda County and parts of Contra Costa County, has called for the removal of President Donald Trump, matching the likes of many other Democrats on Capitol Hill.

"The president needs to leave office," Swalwell said "He cannot defend life in this country, whether it's the coronavirus or the lives of people part of the peaceful transition of power."

He said the House must act quickly to impeach, unless Vice President Mike Pence moves forward with invoking the 25th Amendment, which would mark Trump unfit for office.

"We really have an urgency to act," he said.

Chaos and violence: Social media videos capture clashes between Pro-Trump supporters and police on the frontlines of the U.S Capitol.

"He's quite irrational and he is not someone that should be trusted with the nuclear codes," Swalwell said.

In terms of the bigger picture, Swalwell said the U.S. is under "assault" right now.

"He cannot defend democratic ideals like the peaceful transfer of power," the congressman said.

As for the future?

"(It's) most important to show ourselves and the world that this experiment of self-governance can continue," Swalwell.

Swalwell says removing Trump from office is a "top priority."

He's not alone in that call.

Other California lawmakers have spoken out about the use of the 25th Amendment, saying the nation's security is at stake.

If the president challenges the declaration, that would force a Congressional vote, which would require two-thirds approval in both chambers.