ONLY ON ABC7NEWS.COM: Parent upset about male teacher in girls bathroom at Oakland school 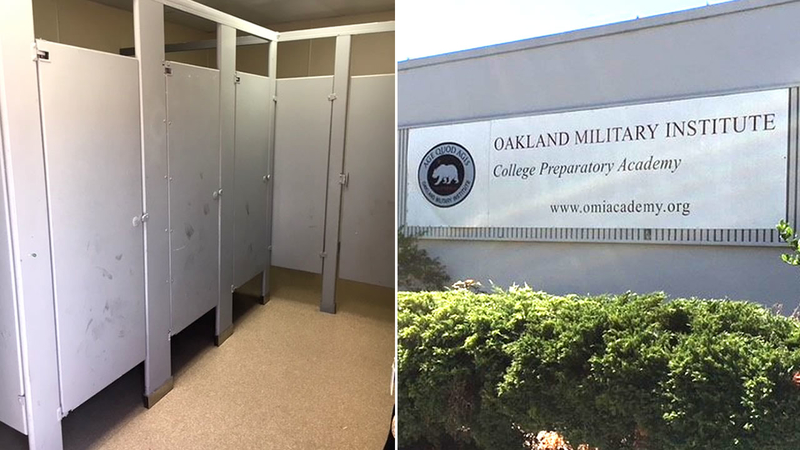 OAKLAND, Calif. (KGO) -- A parent is demanding answers after a male teacher apparently walked into a girls bathroom at the Oakland Military Institute last week. It's a story you'll see only on ABC7.

"We heard someone come in with, like, boots on and we knew it wasn't a kid," said a seventh-grader, while describing an incident she and a friend had at the charter school last Thursday.

The 11-year-old told ABC7 she and her friend were chatting away, each using a stall in the girls bathroom, when they heard someone come in and recognized his distinctive red boots as those of an OMI teacher.

Eleven-year-old Oakland Military Institute student describes moment she and friend realized male teacher was walking in to use girls’ bathroom when they were in stalls. “We heard someone come in with boots and knew it wasn’t a kid. I was praying nothing bad would happen to us.” pic.twitter.com/D4LTkgySxS

"I made eye contact with him through the cracks of the stall," said the girl, who added that there's no way the teacher didn't realize there were students in the stalls. "Well, he did because he seen (sic) our backpacks on the floor."

The young student told ABC7 that instead of turning around and walking out, the male teacher proceeded to urinate in the stall next to hers and then left, without flushing.

The girls immediately reported the incident to school officials.

"One of the administrators who called to inform me of the incident was very nonchalant about it," said Terry Sanders, the girl's mother, who did acknowledge school officials called her soon after the incident.

Sanders went on to say, "As a parent, it just makes me wonder, has this happened before to other children and they just didn't say anything? And why was he so comfortable to proceed to use the restroom after he realized he was in the girls restroom?"

A parent is demanding answers after a male teacher apparently walked into a girls bathroom at the Oakland Military Institute last week. It's a story you'll see only on ABC7.

Sanders took pictures of the boys and girls bathrooms. They are well-marked outside, and look very different inside, especially when it comes to the urinals that line the walls of the boys bathroom. Sanders says she worked at OMI for a time, and according to school policy, staff should never use student bathrooms, period.

"We are well aware of the situation," said OMI's Director of Communications Jocelyn Zylstra. "We take the matter very seriously and are conducting a formal investigation. Nothing has been concluded."

Johnna Watson with the Oakland Police Department confirmed Sanders did file a crime report the day after the incident and that officers will be looking into it.

In the meantime, Sanders said school administrators told her the teacher has received a one week suspension.