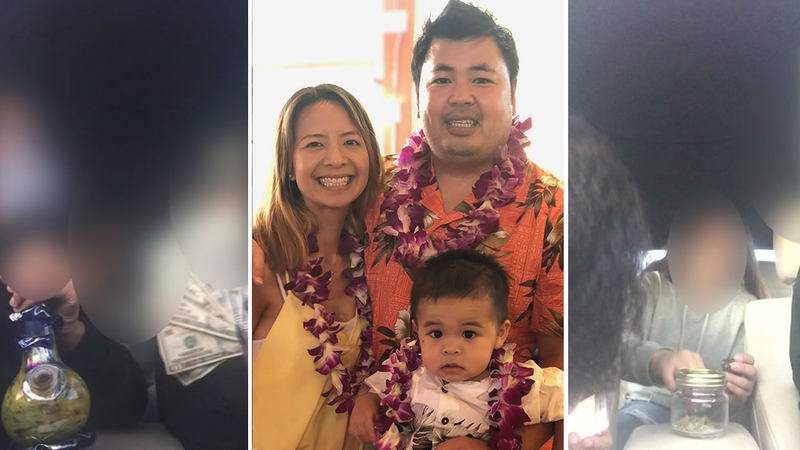 SAN JOSE, Calif. (KGO) -- A San Jose couple is reeling after they say their home was not only burglarized and their BMW stolen, but video of three teens inside the stolen vehicle suddenly appeared on one of the victim's iPhone. It's a story you'll see only on ABC7 News.

This wild story began on Feb. 10 when Tiana Le and her husband Toai Tran came home from their Hawaiian vacation to find their home ransacked.

"I got to my bedroom and noticed everything. I saw my wife's purses on the floor and that's how I knew we got burglarized," said Tran, who pulled up photos from his bedroom after the crime, which show empty boxes, clothes and other valuables scattered all over the floor.

Their black BMW convertible was also gone from their driveway.

Several days later, Tran picked up his phone to look at vacation photos.

"I find there's this random video that's on my phone of three girls smoking weed in my car, on my iPad!" he exclaimed.

The iPad was a gift for Tran's birthday.

The video shows three young women smoking marijuana, waving cash around and listening to expletive-laden music, having a good time.

At one point, Le saw her wallet in the video and knew it was her car. Afraid police wouldn't find the suspects, Le took matters into her own hands. That's when things got ever crazier.

"I put the video on Facebook because I wanted some identification of who they are," said Le. "Because the cops told us the night before, I felt like they weren't going to do anything."

The video went viral, getting nearly 60,000 views. And it was viewed by the mother of one of the teens in the video.

"A friend of mine messaged me and sent it to me through Facebook. It said, 'Liz, I think this is your daughter.' I watched the video and I said, 'Oh, that's definitely her!'" said Elizabeth, who didn't want to further reveal her identity.

The "her" Elizabeth is referring to is her 16-year old daughter, standing right next to her. They live right down the street from Tiana Le and Toai Tran.

Elizabeth's daughter says she did not have anything to do with the burglary or stealing of the car, but admits to partaking in smoking marijuana and recording the experience on the iPad. She was shocked the video went viral.

"I was like, how did that get out?" said Elizabeth's daughter quietly.

Mom immediately reached out to Le and Tran on Facebook. While she didn't receive a response, she has this message for the victims.

Tran and Le have this message back to mom and the daughter seen in the video.

"Crime doesn't pay. I hope she realizes this since she's still young. She can still change her life."