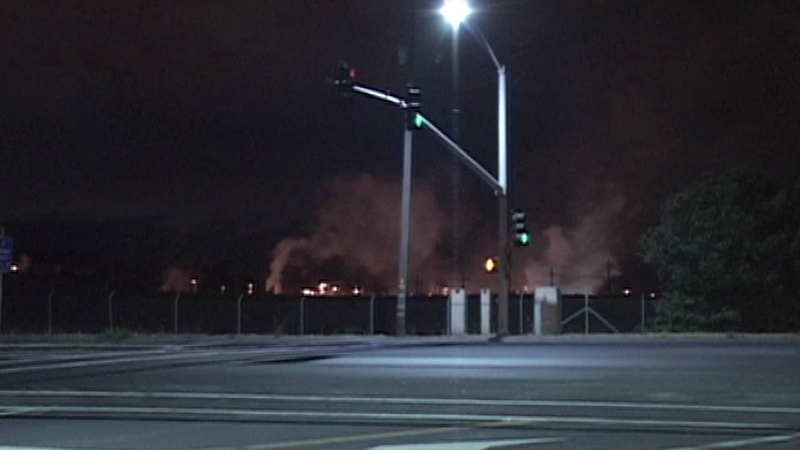 RICHMOND, Calif. (KGO) -- State investigators are the Chevron refinery in Richmond after an early morning fire there. It did not result in injuries, but it did renew concern over the plant that had a huge fire two years ago.

Chevron and fire officials say this was a small fire, but watchdogs of Chevron say that doesn't make them feel any safer. And Richmond's mayor tells ABC7 News that this is just another indication of the risk that people in Richmond face every day.

Richmond firefighters rushed in to help the Chevron Fire department at 2 a.m. Wednesday when a fire started in one of the refinery's small processing units. A spokesperson said there was never a threat to the citizens of Richmond, that it was a small fire and no one was hurt. She refused to talk on camera but issued a written statement saying:

"While preparing a non-operational area for maintenance work using a specialized hose and steam a leak and small fire occurred which was extinguished at 2:59 am."

"For some reason, we're not certain why, heavy oil leaked through this block that they had in place while trying to do this maintenance and it's heated to about 400 degrees so when it hits the air it ignites and there was a fire," he said.

Four of his firefighters ended up with oil on their clothes and had to go through the decontamination process. They are sending the firefighters to the hospital to get checked out.

"Here we go again," said Andres Soto, with Communities for a Better Environment.

Critics of Chevron in Richmond say they were disappointed but not surprised to hear about this morning's fire. Many people lost trust in Chevron after the 2012 fire at the refinery that caused thousands of people to seek medical treatment.

Even though Wednesday morning's fire is being classified as small and harmless, activists aren't buying it.

"These are not accidents," Soto said. "These are predictable incidents when management fails to maintain at the refinery at the highest conditions of safety."

But the fire chief says there's no reason to worry about what happened Wednesday morning.

"By no means can you compare this to what happened in 2012," he said. "This was small situation that was handled very quickly and professionally."