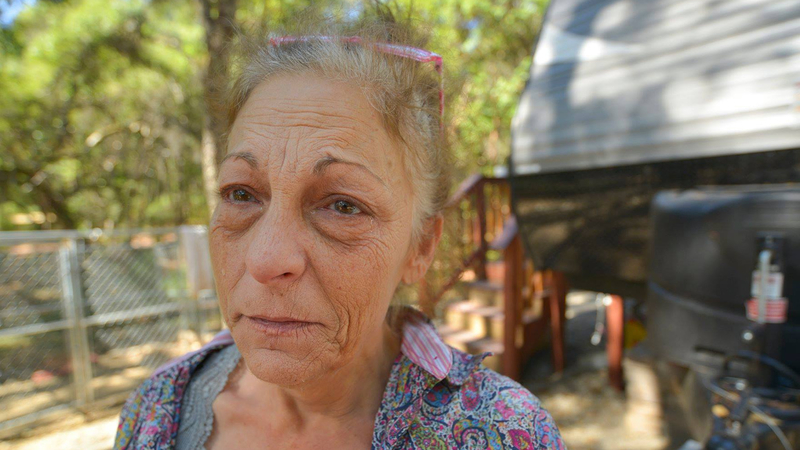 REDWOOD VALLEY, Calif. (KGO) -- In Mendocino County's Redwood Valley, fire victims have grown more than a little tired of living a day at a time, more than a year after the tragedy.

"This is my kitchen," said Tamara Canovas. It's in a FEMA trailer, in a campground filled with people still living in limbo after the Redwood Fire.

With tears pouring from her eyes, Tamara described the frustrations, especially since her landlord decided to not rebuild.

Tamara Canovos in tears. Her landlord chose to not rebuild. Following the Redwood Fire she says she cannot work. "There are lots of mental health problems here," said the former Mendocino County employee. Must leaveFEMA trailer by April. #abc7now pic.twitter.com/EuBgrNFfgL

"It's taken my life. It's taken everything I had."

Nine people died in the Redwood Fire, last year-- 380 homes burned. That is not a large number when compared with Sonoma County to the south, but here, 380 homes equal one of every four.

"There is not a simple answer to any of this," said Tamara.

The community has certainly tried. One year after the fire, Danilla Sands still sees plenty of traffic in her donation center. She has furniture, clothes, food, even toothpaste for still struggling fire victims like Dee Cope, who lost her home, as well. "I am still fighting my insurance company," she said. "Danilla is a lifesaver."

Danilla Sands opened this donations center a year ago. People are still coming in for furniture, clothes, food, even toothpaste. He has helped victims of this year's #Mendocino County fires, as well. Says there will more in CA. "Need to stay open." #abc7now pic.twitter.com/Vx9zIlyNRG

Whiteboard do-list in the donations center, Redwood Valley, #Medocino County, one year after the fire that killed 9 people and burned 380 homes---1 of every 4 in this community. #abc7now pic.twitter.com/HLMNuAAXTr

This is life is the north bay's other fire zone-- the one eclipsed by bigger headlines.

"What if this had happened and Santa Rosa had not?" we asked Danilla.

"We would be looked at a lot more."

Redwood Valley has received assistance, but not nearly enough in this underinsured region.

"There were a little more than 90 families displaces. 90 were renters," said Jon Kennedy of North Coast Opportunities- a non-profit that has moved in to help rebuild homes. Most of the men we found working a home Friday had lost their own places. Pitch in, they say, or rebuilding may never get done.

"If nine builders build three houses a year, that's 10 years to make this place whole, again," said William Shura, who lost his home. "There are a lot of builders and they are charging top dollar everywhere. Next year fire up in the spring, build six or seven at a reasonable price?"

Many of Redwood Valley's burned homes were underinsured. Several members of the crew rebuilding this house lost their own homes. Sweat Equity. #Mendocino #abc7now pic.twitter.com/c6RkzPQEh5

The cosmos helps those who help themselves. In Redwood Valley, those stand as acts of faith.

"Everybody has the same story. We ran for our lives. I'm tired of running," said Tamara.

Dee Cope. "Rhymes with hope," she said. One of the Redwood Fire victims who lost her home. PTSD. Inadequate insurance. Sad story among many in #Mendocino County. #abc7now pic.twitter.com/DcFmKZJcge

Then, she offered us a cup of coffee.