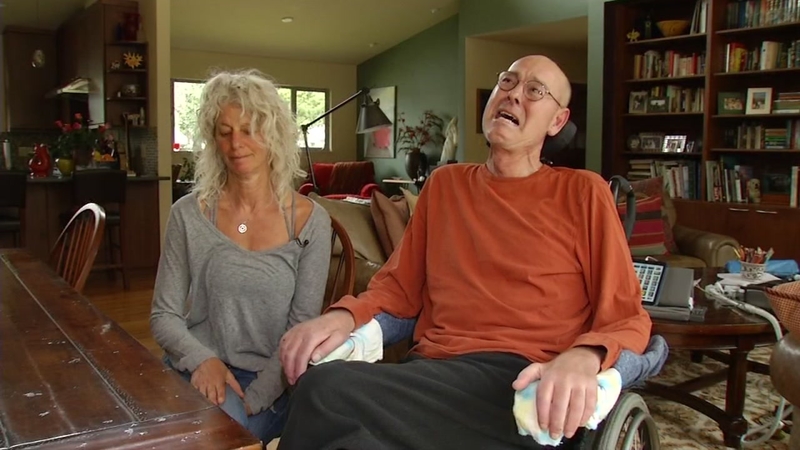 LAFAYETTE, Calif. (KGO) -- Football players and fans are offering support to 49ers legend Dwight Clark, who recently announced he's suffering from ALS, also known as Lou Gehrig's disease. About 6,000 people are diagnosed every year with ALS. There is no cure, but we found a Lafayette man who is fighting the good fight.

Matt Chaney's ALS is progressing very slowly. He was diagnosed 16 years ago. He uses a wheelchair to get around and sometimes an iPad to communicate.

"It helps when my speech is fatigued," said Chaney.

His caretaker, Tami also helps as he copes with the challenges of ALS.

"There are many, but the biggest is losing independence," said Chaney.

The rare disorder affects the nerves and muscles, eventually robbing people of their ability to move, speak, swallow and breathe. As 49ers great Dwight Clark faces this disease, there is hope according to Dr. Jonathan Katz of California Pacific Medical Center.

"I think scientific research is really reaching a point right now where things are beginning to tip right now. We're getting a better understanding of the disease," said Dr. Katz.

Dwight Clark says he believes there's a link with football. Chaney isn't sure though, he played college ball back in the 1970s. He's hoping for some definitive answers.

"Funding research necessary to find a treatment and ultimately a cure," said Chaney.

Chaney, a married father of two has been recognized for his work with the ALS Association and offers to share his experiences with others including Dwight Clark.

"If they have any questions he's here," said Tami, Chaney's caretaker.

Clark said Sunday in an open letter that he started experiencing the symptoms of ALS in his left hand back in 2015.