A crew of robbers hit a smoke shop but then realized they were trapped in their own crime scene.
KFSN
By Jessica Harrington 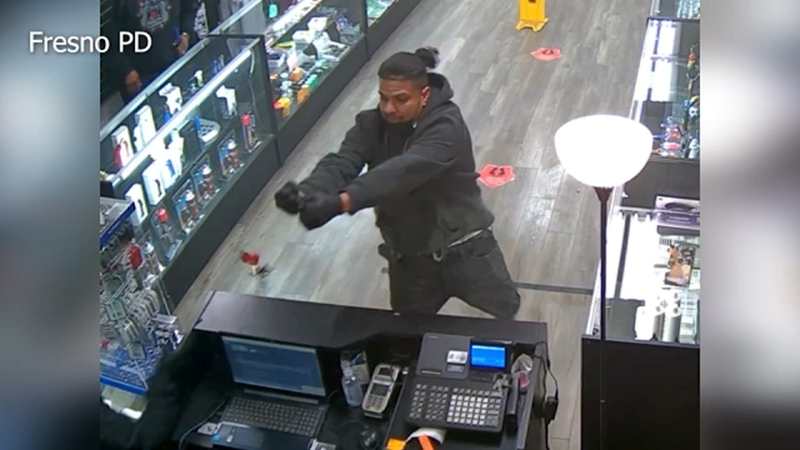 FRESNO, Calif. -- Police are still searching for a suspect who unloaded more than two dozen rounds during a smoke shop robbery last month.

Fresno Police released a video of an armed robbery at a smoke shop near Kings Canyon and Maple Avenue last month.

Investigators say the suspect, Adrian Montejano, 34, was so desperate to get away, he unloaded 30 rounds on the lock.

A woman and the getaway driver were arrested, but police are still looking for Montejano.

"We know who he is, we've looked everywhere, just haven't come across him," said Officer Filipe Uribe.

Police are hoping the community will help track him down.

Officials say, so far this year, there have been four armed robberies at smoke shops around Fresno.

They say it hasn't become a trend, but it's definitely a concern.

"Small businesses that generate a lot of cash flow and don't have a system in place to quickly deposit those funds into a bank," said Officer Uribe.

He says that includes a variety of organizations.

He's only been in business six months and has already fallen victim to thieves.

They broke in overnight in January, despite his cameras and alarm system.

No one has been arrested and the damage left Elhady out more than $12,000.

"But I hope it's not going to happen again," Elhady said.

He's added a chain and lock to the door when he goes home at night and only keeps a limited amount of cash at his store.

As marijuana dispensaries are allowed to move into the city, Officer Uribe says there will likely be calls for service because of the large amount of cash associated with it.

The city says each of the marijuana dispensaries is required to have a detailed security plan and must have armed security during operating hours, in order to keep their conditional use permit.

"When you have a product that the masses desire, you can always kind of expect to be victimized so you have to be prepared," Officer Uribe said.

Officials are asking anyone with information on Montejano, the suspect wanted for the robbery last month, to call Fresno Police.

For small business owners, officials say it's important to be aware of who they're serving and of their surroundings around closing time because that's when most of these happen.