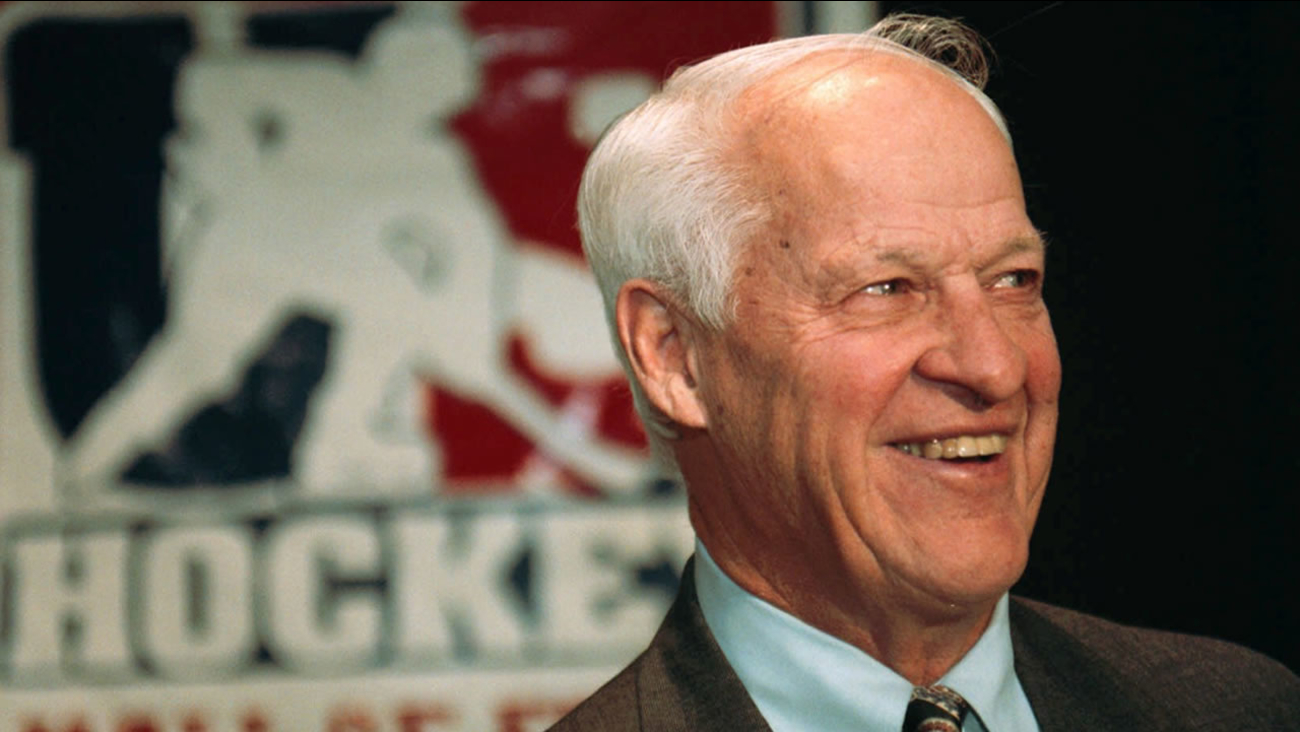 Gordie Howe, the rough-and-tumble Canadian farm boy whose boundless blend of talent and toughness made him the NHL's quintessential star during a career that lasted into his 50s, has died. The man forever known as "Mr. Hockey" was 88.

Murray Howe, one of his sons, confirmed the death Friday, texting to The Associated Press: "Mr Hockey left peacefully, beautifully, and w no regrets." Howe died in Sylvania, Ohio, at the home of Murray Howe, according to Detroit Red Wings executive Rob Mattina.

NHL Commissioner Gary Bettman lauded "the incomparable" Howe as a "remarkable athlete whose mastery of our sport was reflected by the longevity of his career and by his nickname, 'Mr. Hockey.'"

"Gordie's commitment to winning was matched only by his commitment to his teammates, to his friends, to the Red Wings, to the city of Detroit and - above all - to his family."

His final NHL season came at age 52 when Gretzky was a rookie - a fitting symmetry since Howe was the league's most prolific scorer until the "Great One" broke his career marks for goals and points.

Red Wings general manager Ken Holland called Howe "one of the greatest players, if not the greatest," in NHL history and the "greatest Red Wing of all time." Speaking to the AP by phone, Holland said Howe had "as much skill and toughness as anybody who ever played."

"As a human being, he was incredible," Holland added. "He loved to be around people and to make them laugh. He was an incredible ambassador for the sport."

With finesse and a heavy dose of grit, the Hockey Hall of Famer set NHL marks with 801 goals and 1,850 points - mostly with the Red Wings - that held up until Gretzky came along. Howe was also so famously fierce that a "Gordie Howe Hat Trick" became synonymous with the combination of having a goal, an assist and a fight in one game.

Howe suffered a stroke in late October 2014 while at his daughter's home in Lubbock, Texas, losing some function on the right side of his body. He suffered another stroke a short time later and family members said chronic back pain, advanced stages of dementia and high blood pressure were taking a toll. The body Howe relied on as an athlete stayed relative strong, but memory loss became a problem that family members noticed before the death of their mother, Colleen, in 2009.

Exactly one year before his death, Murray Howe said his father was "comfortable and happy" after having another round of stem cell therapy in Mexico. Howe participated in a clinical trial, which the family credited with helping him walk and do some of things he enjoyed, including making people laugh. Howe got one injection of donor stem cells into his spinal column and another intravenously.

The previous year before starting stem cell therapy, Howe told his family he wanted to die.

Murray Howe has said the full two-injection treatment is not available in the U.S.

Mr. Hockey was a giant of the game and no list of the NHL's greatest players has him anywhere but near the top alongside players like Bobby Orr, Maurice Richard, Mario Lemieux, Guy Lafleur, Bobby Hull and Gretzky. Like few others, Howe's impact on the game stretched over decades.

Besides the four Cups, the talented right winger won six Hart Trophies as NHL MVP and six Ross Trophies as the league's top scorer. Howe began playing for the Red Wings in 1946, leading them to seven straight first-place finishes in the regular season. He was a part of what was known as "The Production Line" with fellow future Hall of Famers Ted Lindsay and Sid Abel during his 25-year run with the franchise.

"When Gordie came into the NHL, hockey was a Canadian game. He converted it into a North American game," former NHL President Clarence Campbell said when Howe retired the first time in 1971 because he was playing with arthritis in his left wrist and for a last-place team.

Howe's wife orchestrated a plan to get "Mr. Hockey" back on the ice two years later. She helped him live his dream of playing professional hockey with sons Mark and Marty in the World Hockey Association. And at age 45, Howe still had it. He scored 31 goals and had 69 assists, was named MVP of the NHL's rival league and led the Aeros to the 1973 WHA title - a run that was the focus of a movie: "Mr. Hockey: The Gordie Howe Story."

Howe had 41 points for the Hartford Whalers during the 1979-80 season in what was his 26th and final year in the NHL.

Thoughts and prayers to the Howe family as Gordie Howe passes away at the age of 88. #9RIP pic.twitter.com/i9KRzXRgwV

When Howe finally retired for good from the NHL, he was 52. And with a single shift with the Detroit Vipers in the International Hockey League in 1997, he played professionally in a sixth decade at the age of 69.

He referred to his play as "poetry in slow motion" late in his career, a far cry from his score-and-smash style in his 20s, 30s and early 40s.

Howe handled his business with his elbows and fists almost as often as he did with wrist and slap shots. He ranked among the NHL leaders in penalties minutes three times, spending 100-plus minutes in the penalty box during those seasons. When he resumed playing as a parent with sons on the same sheet of ice, opponents often found out not to mess with his boys.

Howe needed more than 400 stitches to close cuts, lost several teeth, broke ribs and nose. He had a serious head injury in 1950 that led to emergency surgery to relieve pressure on his brain. Despite the blood and broken bones, he didn't miss many games during his NHL-record, 1,767-game career and played in all 80 during his final season that ended after his 52nd birthday.

"You've got to love what you're doing," Howe once said. "If you love it, you can overcome any handicap or the soreness or all the aches and pains, and continue to play for a long, long time."

Mark Howe said his father was "the toughest, meanest guy I've ever seen on a pair of skates," and that's why he was able to play for decades.

"No one in their right mind ever wanted to tangle with him," Lindsay has said. "Gordie had a lethal pair of elbows, was strong as a moose and knew every angle."

Gordon Howe was born March 31, 1928, in tiny Floral, Saskatchewan, and raised nearby on the Canadian prairie in Saskatoon. His father was a laborer and Howe pitched in early, growing strong with the work.

"He was born in a barn and the house he grew up in was no bigger than a garage," Mark Howe said. "They had nothing, like many people during the Depression. Someone was going door to door, selling bags of stuff for $1 and in one of those bags, dad got his first pair of skates."

Howe left as a teenager to pursue a hockey career. Howe made his NHL debut for the Red Wings when he was 18. In Howe's second season, he was an All-Star for the first of a record 23 times.

"Finally, I saved enough to buy my mom and dad a brand new home - with running water," he once recalled. "I think that's the biggest thing I ever achieved. That's what I wanted, and I saved my money to buy it."

Howe was 6-foot and 205 pounds during his career, bigger than most players. His ability to skate, shoot and pass made him a threat every time he had the puck. No one, according to Hall of Fame coach Scotty Bowman, could match Howe's style of play.

Howe surpassed Richard's NHL record of 544 goals in 1963. After the turn of the century, Howe, his sense of humor in full gear, would walk around Joe Louis Arena in Detroit carrying a teacup poodle named Rocket. Howe ranked among the top five in scoring for 20 straight seasons.

Gretzky would later break his records for goals, points, MVP trophies and scoring titles while wearing No. 99 in a tribute to Howe, who wore No. 9 during a lower-scoring era of the game. He finished his career in 1999 with 894 goals.

"I thought I had something they would never touch," Howe said. "But I knew when they started scoring 80 goals in a season I was in trouble."

Mark Messier reached 1,887 points in 2004 during his 25th NHL season and pushed Howe from second to third in the record books.

"I haven't celebrated coming in second too many times in my life," Messier said then. "But I'll tell you, because of what Gordie has done, for us mere mortals who have played this game, being No. 2 is not so bad."

Howe, without a doubt, was most proud of his family. He raved about Colleen, whom he married in 1953. They became personal and professional partners as the woman known as "Mrs. Hockey" championed the game for children and later became her husband's agent.

She died in March 2009 at age 76 after battling Pick's disease, a rare form of dementia similar to Alzheimer's. Their children, Murray, Mark, Marty and Cathy, each took turns having him sleep at their houses for weeks or months at a time after their mother died.

Playing with his sons, though, was what Howe said he was most proud of from his career.

"The fact that I had an opportunity to skate five years with them," Howe told the AP in 2011, "I think that's every father's dream."