Blind man pleads for return of guide dog stolen from his backyard: 'He's a good boy' 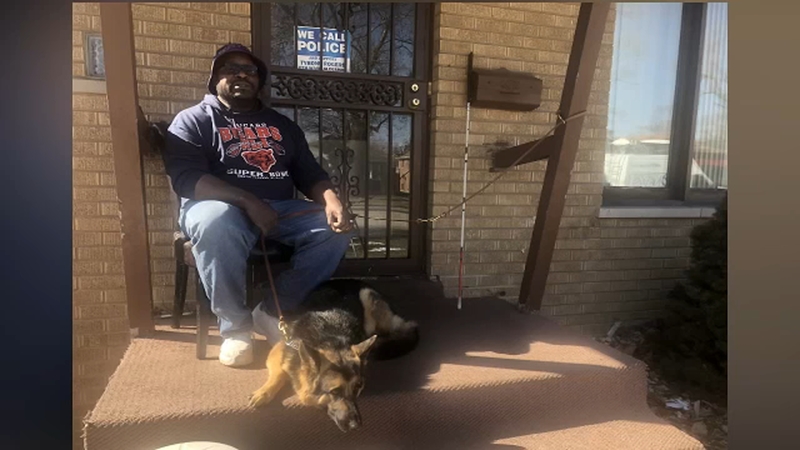 HARVEY, Ill. -- Kevin Coachman is blind. He said he needs his specially-trained guide dog Lucca to lead an independent life, but Lucca has disappeared and he believes someone stole him.

Coachman is heartbroken and fears the worst for his best friend after Lucca disappeared from the backyard of his home in Harvey, Illinois.

"When I got to the back door he was gone," he said. "It feels like a violation and the hardest part is I can't do nothing about it."

The purebred German Shepard went missing Tuesday after the duo spent the day running errands and then walked home from the train station.

"I got him home and I took him straight to the backyard while I went in to feed him and get him water, and when I came back out my dog was gone," said Coachman.

Lucca is barely a year and a half old, and about 60 lbs. Coachman has had him only three months after they were paired together by the Seeing Eye Foundation, an organization on the East Coast that helps the visually impaired. They have been alerted that the dog was taken.

"The mobility issue is bad," Coachman said. "I can't go, my independence has been taken away from me again."

The 58-year-old began losing his sight in 2001, after he was shot multiple times during a carjacking. Long-term damage caused him to go completely blind four years ago.

Since then, the master mechanic who once played semi-pro football has founded a not-for-profit for the homeless after being without housing himself. He said after spending pretty much every day, all day, with Lucca, it's not the same without his best friend to guide him.

"It's like walking in a dark room and you don't know what you can trip over or who's in that room. Or anything like that. It's always scary," he said.

Lucca has a dog tag along with a chip that identifies him as a guide dog, but no GPS tracking. Police have said they will do what they can to find him.

Meanwhile, Coachman and his wife continue to search for the dog and plead with the public to for his return.