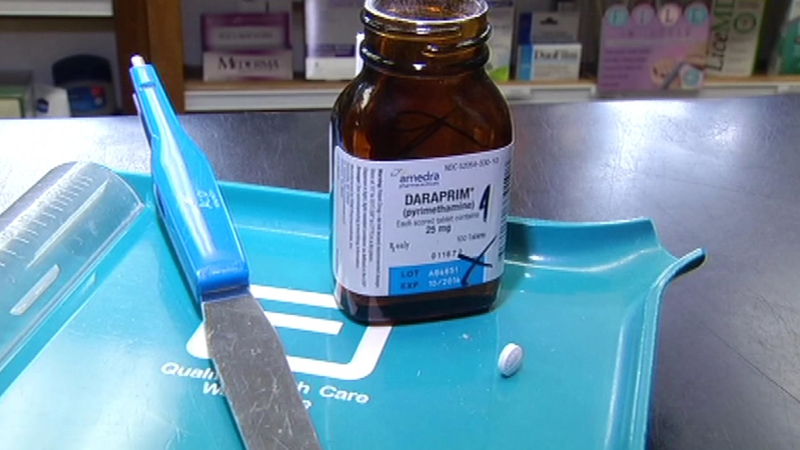 The backlash about an exorbitant increase in a drug used to treat symptoms of cancer and AIDS is making a difference. The company that recently bought the rights to the drug called Daraprim raised its price up 5,000 percent, but now that price is coming back down.

The price of this pill has been on a pricing roller coaster. In August, Daraprim shot up from $18 to $700 per pill.

Now, the pharmaceutical company behind the hike says it will drop the price because of the backlash stirred up by Turing Pharmaceuticals CEO Martin Shkreli. "I think they have a fundamental misunderstanding of the way pharmaceutical companies operate. At this price, Daraprim is not a substantially profitable drug," he said.

The drug is used to treat Toxoplasmosis, a condition that cancer and AIDS patients can be at risk for because of weakened immune systems.

Shkreli's move to change the price of the drug is more than just a surprise for AIDS healthcare advocates. They say their clients are suffering. "We're having a lot of really extraordinary increases, usurious increases, completely unjustifiable increases in the costs of medications because they think they can," AIDS Housing Alliance spokesperson Brian Basinger said.

They've seen the price of all types of drugs ratchet up over the last few years, but Daraprim was just among the most exaggerated.

This is an issue that is getting some attention at the state level. "It tries to address the issue of drug pricing from a healthcare perspective so that consumers can continue again to access the drugs. Unfortunately it can't really do much on the pharmaceutical drug pricing side," San Francisco Aids Foundation spokesperson Courtney Mulhern said.

But that is a federal issue. Democratic presidential candidates Hillary Clinton and Bernie Sanders have both been calling for pricing reforms.

The increased scrutiny has caused many pharmaceutical companies' stock prices to drop over the last couple days. That might also be the reason behind Tuesday's move to drop the price of Daraprim.
Related topics:
health & fitnessbusinessdrugpharmaceuticalsaidsu.s. & worldcancer
Copyright © 2021 KGO-TV. All Rights Reserved.
TOP STORIES
53 cases of new R.1 COVID variant detected in CA
Wiggins says he will stick to beliefs regarding vaccine
EXCLUSIVE: SJ man warns others after being harassed over dinosaur flag
Breakdown of vaccine requirements for SF, Oakland city employees
LIVE: Track temps, air quality around SF Bay Area
California to replace the word 'alien' from its laws
Steve Kerr reveals how his name made it in hit show 'Ted Lasso'
Show More
R. Kelly found guilty on all counts in sex trafficking trial in NYC
Pfizer to ask for approval of COVID vaccine for kids in matter of days
COVID vaccine boosters now available in Bay Area
CA to mail every voter a ballot in future elections
SF-based tech entrepreneur to go to space with Blue Origin
More TOP STORIES News