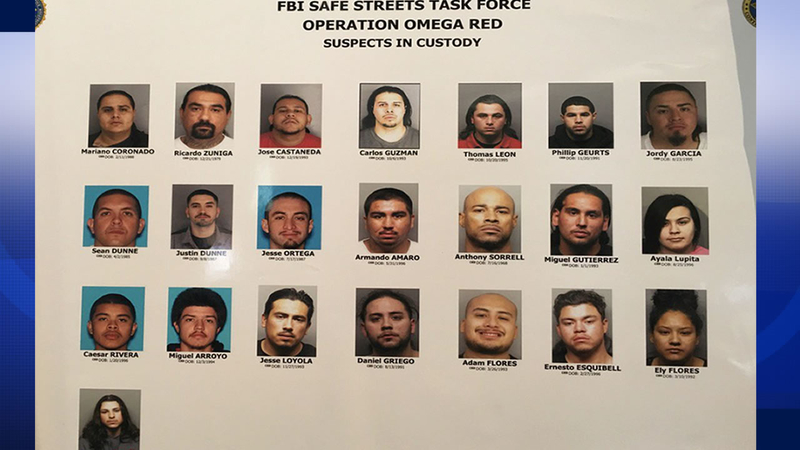 PITTSBURG, Calif. (KGO) -- There is a break in the case involving some of the shootings in the East Bay, along the Highway 4 corridor. It's part of a fugitive sweep that nabbed 24 suspected members of the notorious Norteño gang.

The Contra Costa District Attorney's Office believes says the Norteño gang members cruised around the Delta in a customized boat, with a prominent number 14 on the front, their adopted emblem.

They say it was bought with illegal drug profits.

Also seized was a Mercedes and a Porsche - the back seat filled with a stash of marijuana.

The 10-week intensive investigation with 12 local and federal law enforcement agencies culminated in 24 arrests of Norteño gang members on August 3.

"It took 250 to 300 officers to search 21 houses on the same day at the same time virtually, so it's a huge operation," explained Mark Peterson, the Contra Costa DA.

Concord police was at the center of it all as they called upon a new FBI Safe Streets Task Force to investigate an uptick in crime. A marijuana grow house in Concord involved in the raid is estimated to have stolen $30,000 worth of utilities. Guns, methamphetamines and heroin were also were seized.

The ringleaders were identified as 31-year-old Sean Dunne and 28-year-old Mariano Coronado.

At least three individuals are charged with multiple attempted murders and four with conspiracy to commit murder. So, the good news is we stopped them before committing the crime," said Peterson.

"These are violent people with no regard for human life. We're working with all these agencies to attack that," said Paul Fontana, CHP patrol chief.

The CHP says they believe two to three of the recent freeway shootings in the Highway 4 corridor may be tied to the gang members that were arrested.