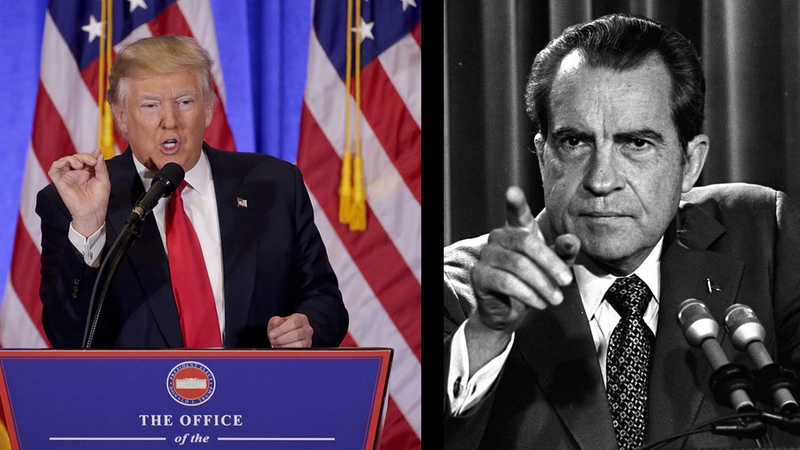 WASHINGTON D.C. (KGO) -- Constitutional law experts are reacting to what we're seeing in Washington D.C. and they're breaking down what could actually happen within the next week with President Donald Trump.

"It looks like we're reaching a kind of historic tipping point, much like in the Watergate hearings when Senator Goldwater turned against President Nixon," says UC Hastings constitutional law professor Joel Paul.

This comes as a growing number of Republican lawmakers say they now support an impeachment of President Trump.

Now, all the talk is on impeachment, a possible self-pardon, and even a possible repeat of what we've seen a former president do in the past.

VIDEO: What would self-pardon mean for President Trump? Law professor says it could get messy

The call for the removal of President Donald Trump from power, or another impeachment, is getting louder from Democratic lawmakers. But what if he tries to invoke a self-pardon? Experts weigh in.

"I certainly imagine his advisors would be telling him, 'if you want to protect yourself from criminal liability the safest way to do that is do what Richard Nixon did.' Which is to resign and then have your vice president, who becomes president, pardon you and that would make the pardon valid and there would be no question about it," says law professor Julie Nice of University of San Francisco.

UC Hastings Professor Joel Paul says Congress might consider a joint resolution inciting insurrection, connecting President Trump to this violence we saw last week, something that could then involve a ban of President Trump from ever holding office again.

Nice says whatever happens will most certainly play out in Congress.

"The House and the Senate have the sole power to impeach and try the impeachment, so they are really the ones who get to decide, and when the Senate and the House are making the rules, that means politics are governing this," says Nice.
Report a correction or typo
Related topics:
politicswashington dcimpeachmentdonald trumppardongovernmentus capitollawsu.s. & worldpresident donald trump
Copyright © 2022 KGO-TV. All Rights Reserved.
TOP STORIES
SF couple gets $1,500 fine for parking in their driveway
LIST: Bay Area 4th of July events
Gov. Newsom pardons woman who killed her pimp as a teen
BART hires Pac-Man the hawk for pigeon patrol duty
Uvalde school police chief resigns from city council
VP Harris expected to discuss Roe overturn at Essence Festival
Texas Supreme Court blocks order that resumed abortions
Show More
Hospitalized Daily Harvest customer tried to warn CEO
Hidden Gem: $10 trip on SF Water Taxi
Sheriff: 3 arrested after armed robbery outside Danville store
Thousands of dead anchovy wash ashore, fall from sky in Marin Co.
On The Red Carpet previews hot movies, shows for July
More TOP STORIES News