Jacksonville business asked to take down military flags; veteran allegedly told 'You did nothing for this country' 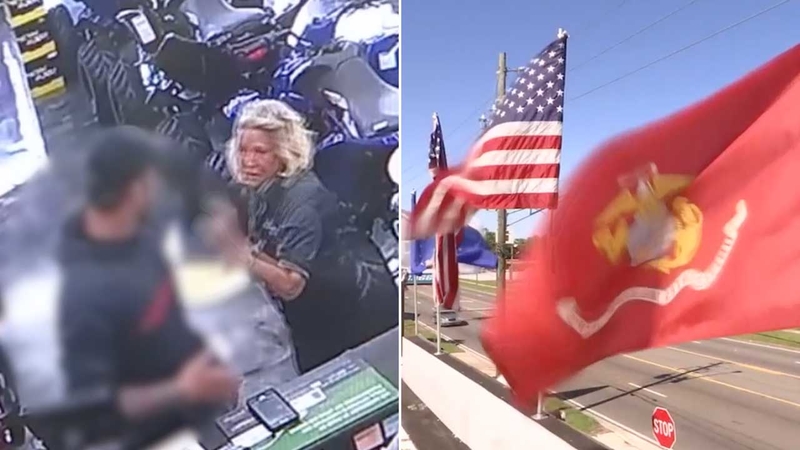 The mayor of Jacksonville has responded to growing outrage after Jaguar Power Sports was issued a warning citation for their patriotic rooftop flag display. Store employees say the incident also involved mistreatment of a veteran.

"We cater to our men and women, both retired and active military, so it was personal. We felt like it was a personal attack," the store's sales manager, Marcy Moyer, told WJXT.

The store, which sells motorcycles, ATVs and power sport equipment, has flags from every branch of the military, two United states flags and a Jacksonville Jaguar flag. On Monday, Melinda Power, a city of Jacksonville inspector, issued a warning citation for the display, saying the military flags were in violation of city code. She entered the store accompanied by her supervisor.

The store expressed frustration not just at the fact that they were asked to take down the flags, but at the way Power behaved when in the store. Katie Klasse, a store employee, recounted what happened when a customer who is a veteran got upset with Power.

Jaguar Power Sports went live on Facebook after the incident, asking viewers to share the story. The video now has millions of views.

In a statement late Monday, the city mayor supported the business, saying of the flags, "Let them fly." He added that he had instructed employees to treat military flags the same as U.S. flags and that all employees should be respectful.

1. I Have directed city staff that military flags should be treated same as US flag. Let them fly. I Have reached out to the business owner & will review employee procedures. COJ employees r expected to be respectful of our customers - you, the people of Jacksonville.

2. We support our military and veterans, and we appreciate businesses who honor their service.