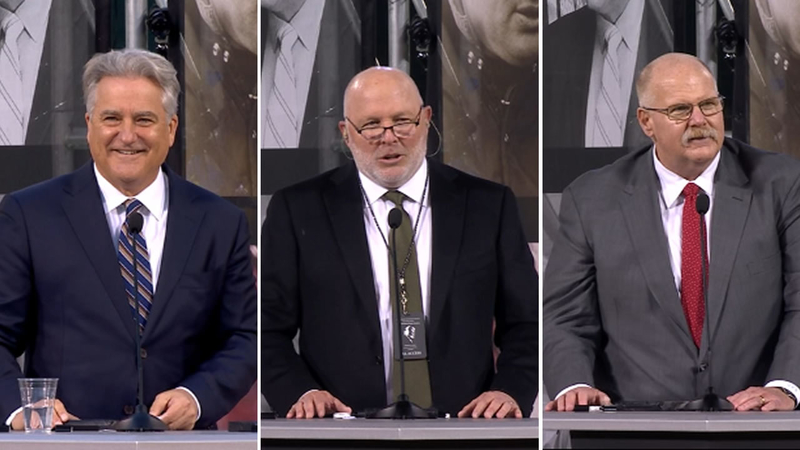 OAKLAND, Calif. (KGO) -- Monday, the public said goodbye to a Raiders legend, an NFL icon, and a dear friend in the late John Madden.

A public memorial was held at a place near and dear to Madden's heart - the Oakland Coliseum.

Here, he led the Silver and Black to greatness and made them World Champions.

Seven people took the stage to remember and honor Madden's legacy as a coach, a broadcaster and world-renowned influencer of the sport of football.

Here are all of their tributes to the beloved "Coach":

Former 49ers head coach Steve Mariucci reflected on his friendship with the legendary John Madden saying he had the biggest heart of all.

Lesley Visser, Broadcaster
"He changed broadcasting the way he changed everything he did."
EMBED More News Videos

Former sportscaster Lesley Visser said Madden changed broadcasting the way he changed everything he did.

Virginia Madden, Jon Madden's Wife
"I know he's up there, and I know he's smiling down on all his players... and all you people, the fans, that supported him for so many years."
EMBED More News Videos

The Washington Commanders Head Coach Ron Rivera says the best advice Madden gave him was to trust his gut.

"I don't think it's too big a stretch to call [John Madden] the conscience of the National Football League," said former KCBS broadcaster Stan Bunger.

Andy Reid, Kansas City Chiefs Head Coach
"He took me in as one of his own."
EMBED More News Videos

Super Bowl-winning Kansas City Chiefs coach Andy Reid said John Madden took him in as one of his own during his career.

John Madden's son, Mike Madden, spoke at his father's memorial at the Oakland Coliseum. His speech highlighted his dad's positive influence, and great sense of humor.