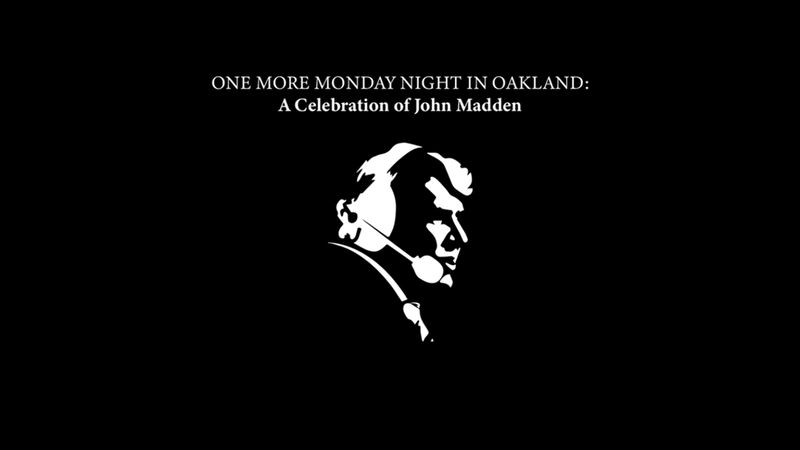 "He was like the big guy that was just animated. He was sincere and he was funny, he was interesting, he was creative, he would just hold your attention for three hours," said former 49ers coach Steve Mariucci. Mariucci was one of several who spoke at the Madden memorial, highlighting John Madden the Emmy-winning broadcaster and John Madden the Super Bowl winning Raiders coach.

"He was personable but then he also was a bad -- if you messed up, he let you know," said former Raiders tackle Henry Lawrence.

"One of the first things he said to me was, 'Don't ever forget you're the head coach, own it because when you win they're going to want the credit, and when you lose they're not going to help you so you might as well do it your way,'" said Washington Commanders head football coach Ron Rivera.

"It's an honor to be here. I know I'm in enemy territory for a great cause, for a great man," said Chiefs head coach Andy Reid.

Fans, friends and family remembered and celebrated the life of John Madden, who passed away last December at the age of 85.

"Once John thought anybody - male or female, Black or white, Hispanic - once he knew you were serious and authentic, did you feel like he was on your side? 100%," said Lesley Visser, talking to retired radio host Stan Bunger.

As the first female NFL analyst, Visser spent a great deal of time with Madden and remembers his impact on those in other industries outside of football.

RELATED: Pro sports world thanks late NFL icon John Madden for his legacy, inspiration in football and beyond

Yes, Madden had the interest of some of the world's biggest superstars but will be forever loved by his family and Raiders fans.

"He's provided me with a lifetime full of lessons and I'm proud," said Mike Madden.

Virginia Madden pledged to match up to $1 million of what was raised.

"He's an indigenous leader to us in terms of how he led, how he pushes, how he influenced the younger generations," Forever Oakland Founder Griz Jones said. "We're here to honor that and his legacy."
In true Oakland Coliseum fashion, fans tailgated before the big event. Jones and his group has been here since Friday night.

The loss of John Madden weighed heavy on Raider Nation and the East Bay.

"This is the official memorial tribute tailgate for John Madden and his influence as an East Bay icon," Jones said.

For decades, the East Bay was Madden's home. Just down the road from the Coliseum in Pleasanton, he's remembered as a man of the people.

Madden frequented many spots in Pleasanton, but Vic's All-Star Kitchen was one of his favorites for decades.
A table remains dedicated at the restaurant in Coach Madden's honor.

"After he retired, he used to come four times a week, like almost every day," Vic's Co-Owner Laura Castro said.

Madden would come in with family, friends and even Raiders.

But the one thing that never changed was his order, aptly named the Madden Special, corned beef, hash browns and over easy eggs.

After serving him for many years, Castro and the Madden family became very close.

She says he will be missed, but forever remembered in this town.

"He's more part of the restaurant because of the good memories and his family was close to us," Castro said. "That's very special. He's a big icon, even before and now, more. We're so proud. He's Madden from Pleasanton."

Tickets for the memorial cost $32.14 each, a nod to the final score in his Super Bowl victory, and proceeds go to providing educational opportunities for the youth of Oakland.

John Madden -- true man of the people, he will be missed.