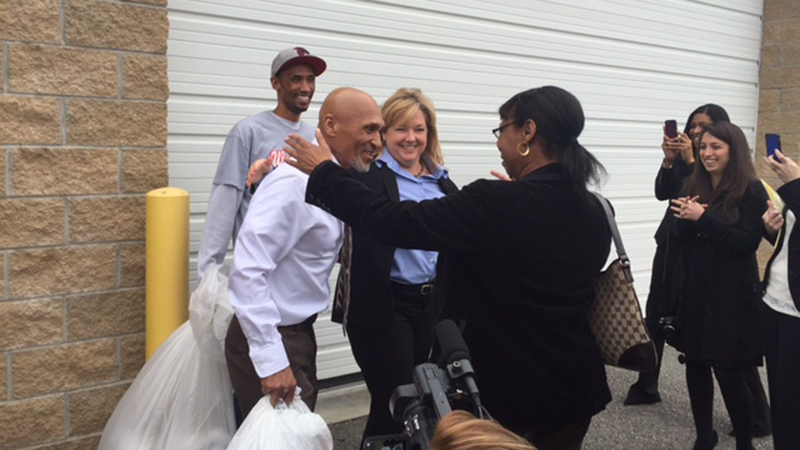 70-year-old freed after decades in prison

WHITEVILLE, N.C. -- Joseph Sledge has maintained his innocence for the nearly 40 years he's been locked up.

For the same number of years, the physical evidence key to his exoneration remained locked up in what's known as Vault #1--the place in the Columbus County, N.C. Clerk of Courts office that holds evidence for old cases.

"When you're conscious of something you didn't do, you can live with yourself," Sledge told reporters in the minutes after walking away from the county jail. "It's between you and your maker. That's the reality of the matter."

On Friday, the 70-year-old North Carolina man was freed, exonerated of a 1976 double murder and rape in which newly tested DNA evidence proves he did not commit. The case may now be re-opened in hopes of finding out who killed Josephine and Aileen Davis, the 74-year-old mother and 53-year-old daughter who were brutally murdered in their Elizabethtown home.

A three-judge panel heard testimony and impact statements from the clerk who was present when the evidence was discovered, the Texas DNA expert who confirmed the crime scene evidence did not match up with Sledge, and a family member of the two women who lost their lives in a horrific way.

Chris Mumma, the defense attorney who has worked on Sledge's case for the past decade, held back anger in the courtroom during her closing argument.

"This has not been an easy battle," Mumma said once Sledge left the jail with his family. "I have to say my hope and faith has been shattered."

Friday's hearing reiterated facts a jury never heard in 1978 including how neither the fingerprints nor the bloody footprints nor the pubic hair found at the crime scene matched Joseph Sledge.

That jury only heard from two inmates who claimed Sledge had confessed to the killings. Those inmates would later split a $5,000 reward from the state for their testimony.

When Sledge was named a suspect in the case, he had escaped from prison where he was serving a sentence for larceny-stealing clothes. An inmate beat him up and tried to get away. As he traveled through Elizabethtown, the Davis women were being attacked.

In 1979, Sledge would request an appeal to the murder and rape convictions. He knew the real killer was on the streets.

That would be followed by more than two dozen motions for the state to take another look. Then in 2003, Sledge wrote them a handwritten letter asking someone to locate that physical evidence he knew would set him free. A series of similar court-ordered requests would follow from the state's Innocence Inquiry Commission, which took on Sledge's case in the mid-2000s.

Rita Batchelor, the Columbus County Clerk of Court, was one of the staff members who was tasked with finding the missing evidence requested. Time and time again, she said they searched to no avail. An "extensive search would have had to be done," Batchelor said.

"We just couldn't find anything," she testified. "I think there was just a lot of confusion as to who had what."

Everything changed on an August 2012 day when she and a colleague were cleaning out Vault #1. Only the high clerk had the combination to the lock, but the women were charged with cleaning it out for a move to the new county annex.

On a top shelf, in the very back, there was an envelope that belonged in Sledge's case box.

"She was up on the top of the ladder and she was pulling boxes and just different things out and she pulled out this envelope and it had his name," Batchelor testified. "And she said 'This is like in the Joseph Sledge (case) and she said 'This must be something... the hairs they were looking for."

Just when Chris Mumma was about to give up and close the case that had no physical evidence to set her client free, the phone rang. Divine intervention is what she called the call from Batchelor.

DNA testing proved Joseph Sledge was not the killer.

The Davis' family members quietly filed out of the Columbus County annex following the hearing.

Weeping was heard at one point, as the judges unanimously agreed Sledge was innocent, and David offered apologies to both families, and the community, calling the conviction of an innocent man "a prosecutor's worst nightmare."

"Let me just be the first on behalf of the State of North Carolina to apologize to Mr. Sledge for that," David said.

David said he would request the state re-open the case, and take a look at other crimes committed around the Davis' home in 1976.

"The system has made a mistake," he continued. "The wrong man is in prison."

"What has been proven is the process doesn't work," Mumma followed up.

In the courtroom, Sledge was hugged by Dwayne Dail and Willie Grimes, North Carolina men who had been in Sledge's shoes. Both were helped by the Innocence Inquiry Commission, and DNA evidence cleared them of separate 1987 rape cases. They are a part of an eight-person fraternity exonerated since 2007, when the state established the Commission. It's the only organization of its kind in the country. They've reviewed 1,500 cases.

Then Sledge met his 38-year-old nephew the first time.

"He looks just like me," cried Maurice Sledge in disbelief. "It's like an image, him looking at me. Wow."

Some sort of paperwork formality kept family and media waiting for Sledge to be freed from the jail from more than an hour. After speaking with media about his steadfast faith, showing the calloused knuckles that resulted from decades of pushups in prison cells, and joking that he might go to the Super Bowl after sleeping in a nice bed, Sledge hopped in a car with his sister, Barbara Kinlaw.

It was dinner time at a local restaurant, and they had to hit the road to go home to Savannah, Georgia, but not before he offered this message to the real killer.