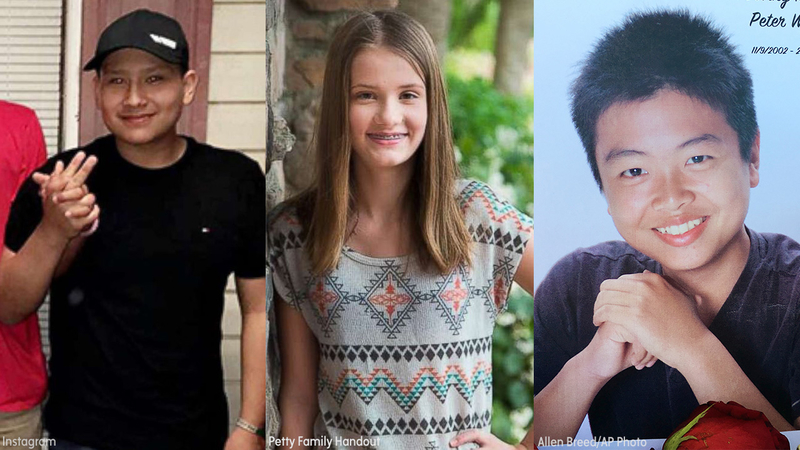 Alaina Petty, Martin Duque and Peter Wang have all received the U.S. Army's Medal of Heroism following their tragic deaths during the Valentine's Day school shooting in Florida.

It is with broken hearts that Sunrise Post 365 & Stoneman Douglas JROTC shares the loss of our soaring eagles! We honor them, and will miss their courage, tenacity, and their smiles! Cadet Peter Wang, Cadet Martin Duque, and Cadet Alaina Petty. May they always soar high! pic.twitter.com/eg0TKprzMV

All three served as cadets in the Junior Reserve Officers' Training Corps (JROTC) program offered at Marjory Stoneman Douglas High School in Parkland, Florida. They were among the 17 victims who died during the shooting.

Wang was remembered by his friends and classmates as a hero for holding doors open to allow students, teachers and staff to flee during the shooting. He was wearing his JROTC uniform when he was killed.

"I want people to know he died a hero," classmate and friend Aiden Ortiz told ABC station WPLG. "He died saving many people."

Ortiz and fellow classmate Rachel Kuperman have created a petition on the White House website "We The People" in hopes of honoring their fallen friend with military honors. By Tuesday, the petition has received over 64,000 signatures. It needs 100,000 signatures within 30 days to receive a response from the White House.

Wang was posthumously admitted to West Point, the U.S. Military academy he dreamed of attending, according to the Florida Sun Sentinel.

The family of Cadet Petty received a "keepsake" medal for her funeral on Monday. About 1,500 attended the service for the 14-year-old who was a part of the female color guard team, according to the Florida Sun Sentinel.

Cadet Duque will be honored at his funeral on Saturday. His family described the 14-year-old as a good student who loved football and attending church. The family has set up a GoFundMe page that has already received over $40,000 in donations.