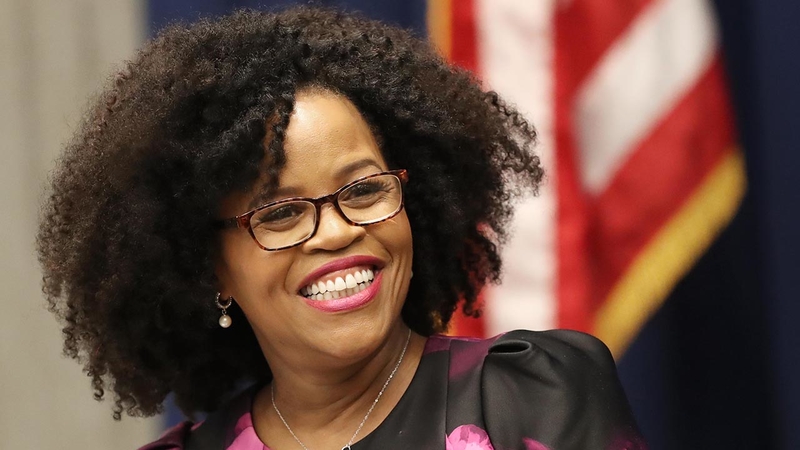 BOSTON -- Boston has its first-ever Black and female mayor.

Kim Janey became the first woman and first Black person to serve as Boston's mayor on Monday night. She will be officially sworn in on March 24, according to the city.

"I come to this day with life experiences different from the men who came before me," Janey wrote in a Boston Globe op-ed about her new role.

When then-President-elect Joe Biden tapped Boston Mayor Marty Walsh to be his labor secretary in January, Walsh's departure meant Janey would become the city's acting mayor. As the Boston City Council president, Janey was next in line for the mayor's office.

Janey officially became acting mayor at 9:01 p.m. Monday, after Walsh was confirmed by the Senate and then resigned from his role as mayor, according to the Dorchester Reporter.

Janey will serve out the final year of Walsh's term ahead of an election this November.

In the Globe, Janey promised "bold, courageous leadership" during her time in office, and in the wake of the COVID-19 pandemic, a "citywide agenda of recovery, reopening and renewal."

While the November mayoral race is expected to be contentious and draw a wide field of candidates, Janey has not announced a bid for a full four-year term as mayor.

"When I was just 11, school busing rolled into my life," Janey wrote in her op-ed. "I was forced onto the front lines of the 1970s school desegregation battle. I faced rocks and racial slurs thrown at my bus, for simply attending school while Black."

The Boston Foundation, a local philanthropic organization, called Janey's ascension "a remarkable milestone for the city."

In 2017, Janey was first elected to the Boston City Council to represent a district that includes Roxbury and parts of Fenway, the South End and Dorchester. Her victory then was also historic: She was the first woman ever elected to represent the district.

"Today is a new day for Boston," Janey said in the Globe. "As your mayor, I promise to bring my life experiences and passion to make this city better for everyone. I will strive to make positive change across our city."