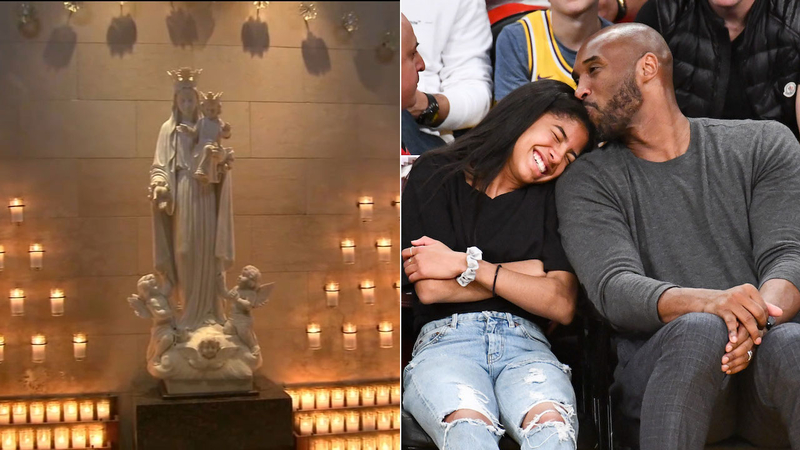 NEWPORT BEACH, Calif. -- One of the last things Kobe Bryant and his daughter Gianna did before boarding the helicopter flight that led to their deaths was attend Sunday church and take communion, according to his priest.

Father Steve Sallot, a Eucharist priest at the Orange County church the Bryant family attends, was one of the last to see him alive.

He told Eyewitness News that Kobe and Gianna stopped by Our Lady Queen of Angels in Newport Beach, California and received communion before boarding the fatal flight.

"He was here before the 7 a.m. mass and that's our first mass of the day. So he would obviously have been in the prayer chapel before that and he was leaving about 10 to 7," Sallot said.

RELATED: Calabasas helicopter crash: What we know about all 9 victims

The helicopter crash was reported at 9:47 a.m. that morning in the Calabasas area.

Fans, family and the community are sharing memories of the nine people killed in the Sunday morning crash.

On Monday, parishioners at Our Lady Queen of Angels prayed a rosary for the lives lost.

RELATED: Over 1.5 million and growing sign petition for Kobe Bryant to be new NBA logo

A memorial was also growing outside the Bryant family home in Orange County.

Eyewitness News ran into fans from as far as Turkey outside the home Monday.

Asu Gokdelen was visiting with her family from Istanbul. She remembered seeing Bryant during his first game in 1996 when she was a student at USC.

"When we heard the news we were very sad ... we wanted to visit this place and give our condolences," Gokdelen said.

Locally, Bryant, his wife and daughters were honored and respected daily.

Krave Kobe Burger Grill Newport Coast had a wall honoring Bryant in the restaurant that was put up prior to his death.

"That was a wall of fame, we like to call it, and a tribute for what he's done for the community," said Nima Farokhirad, the restaurant's vice president of operations.

Most of the nine occupants of the helicopter that crashed Sunday were Orange County residents who knew Kobe through youth sports connections.

In a statement, the Chester family mourned the loss of Sarah Chester, a wife and mother, and Payton Chester, a sister and daughter- both part of the St. Margaret's Episcopal School community. The mother and daughter were both onboard the helicopter heading to Mamba Sports Academy where Payton trained.

"Payton had a smile and personality that would light any room ... She found joy on any court and loved all of her teammates and coaches," the statement read, adding, "Sarah was full of life and the glue of our family. She was a tireless force in support of her family."

"She was absolutely amazing at what she did and as good as she was at the Xs and Os she was with how to treat the girls," Matthew Mauser said, adding, "I just wanted to watch our kids grow. I just want my wife."