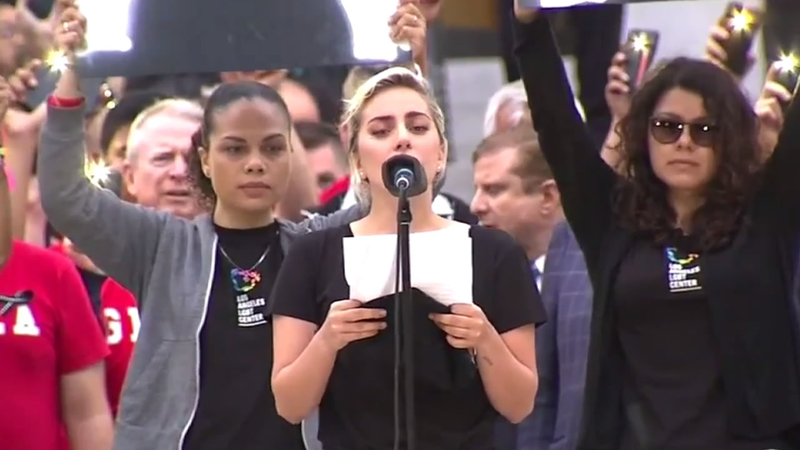 WEST HOLLYWOOD, Calif. -- Thousands of people, including Lady Gaga, gathered at Los Angeles City Hall Monday night in a vigil to show support for the victims of the Orlando massacre.

Lady Gaga read the names of the 49 victims one-by-one to the crowd of about 7,000 people.

"This is an attack on humanity itself," the singer told the crowd.

We can always count on one another's pain to remind us what strength is all about. #UnitedAsHumans #UnitedAsFriends pic.twitter.com/udBKNuo4km

After the event, she tweeted: "We can always count on one another's pain to remind us what strength is all about."

Love spread through the massive crowd at City Hall, amid tears and hugs as attendees vowed to fight for a better future.

"They were so young," said Cristian DeLuca, who attended the downtown event. "You can't cut a life short like that. No one deserves that."

The Los Angeles event was one of many held around the globe to honor those who were killed or wounded by gunman Omar Mateen at Pulse, a gay nightclub in Orlando.


Another vigil held in West Hollywood drew hundreds of people.

Representatives of the Muslim community joined in condemnation of the attacks in an interfaith vigil held by the Islamic Center of Southern California.

"It's really time for us to all stand up together against terrorists or dictatorships," said Saher al Khattib, who participated in the interfaith event. "Just stand up for freedom and love and justice."

I pray for all the victims families 🙏🏽 during this shooting epidemic. That their pain be met with compassion and support from the world.

It's a traumatizing & emotional time for a many people. I dream of the world reflecting on what we can do to change this violence. #Orlando

Stand strong w/ ur pride, it belongs to u. Love is opposite of hate. My sincerest mourning 4 LGBTQ's suffering 2day pic.twitter.com/0n3A143GEg

DONATE NOW to https://t.co/EGnJyD9Yaa the help the victims and their families. #Orlando

Ignore voices that aim to divide us, this only leads to more violence between people. We must unite as humans, where we are all the same. 🌏