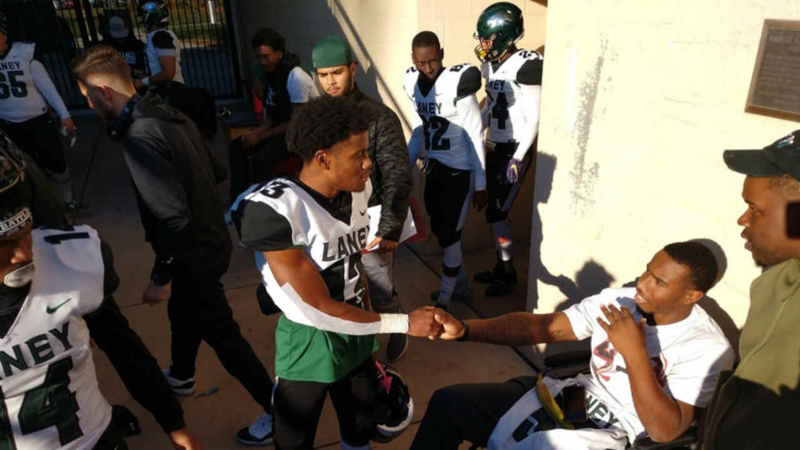 OAKLAND, Calif. (KGO) -- A Laney College football player is fighting a hard battle against cancer. There are a lot of people in Oakland supporting 19-year-old Ramone Sanders after he broke his leg.

It was then that doctors discovered he had bone cancer. Now he and his family need help with medical expenses, so a GoFundMe account has been set up.

Ramone Sanders spoke to us from his hospital bed at UCSF Benioff Children's Hospital.

"I have a lot of people in my corner who want to see me succeed," said Sanders.

Last November, Sanders broke his femur while playing football for Laney College. It turned out to be more serious than a simple broken leg.

His father, Ramone Sanders Sr., spoke to us at the hospital.

"They did an x-ray and they found cancer in his femur bone, then they found a couple of spots in his lungs as well," explained Sanders, Sr.

Weak following his first round of chemo, Sanders had to return to the hospital.

Some of his teammates from McClymonds High School, who now also play for Laney College, have visited him in the hospital to try to lift his spirits.

His team says his absence has been felt on the field.

"He was the life of our defense. He came out of nowhere and started doing his thing. It was a great loss," expressed teammate John Carter.

RELATED: Purdue Boilermakers superfan who inspired many, dies of cancer at 20

"Always upbeat, never negative, so anytime we lose a guy like that it hurts the camaraderie, it hurts the friendship, all the bonds that we have on the team," said Coach Jeff Haagenson and offense coordinator.

His community is now organizing a fundraiser for the family to help with medical bills and other expenses. The event will take place on February 17 at Everett and Jones BBQ in Oakland.

"He's a fighter. We call him, myself and his mom, call him our superman, yeah," his dad told us.