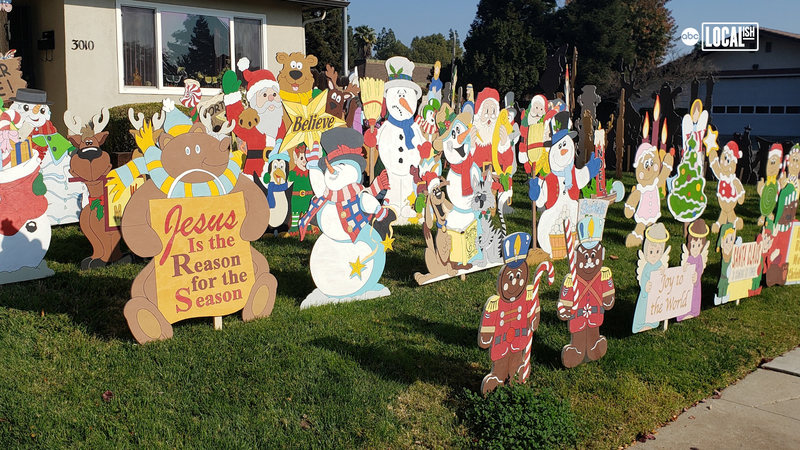 FRESNO, Calif. -- The holiday season never really ends for Harvey and Mary Fogle, who spend all year making and selling Christmas yard art in a shed in their backyard.

"I started out with one pattern, now I'm up to 125," Harvey said. He began making the holiday art after Mary brought home a pattern 11 years ago. Harvey had just retired and was determined to find something to keep him busy.

"I was a truck driver for 44 years... I just didn't want to become a couch potato and sit on my rear end and do nothing," he said. Instead of sitting around, he spends 3-4 hours a day in a shed in his Fresno backyard cutting, painting and creating wooden Christmas art for people to display in their yards. The pieces are simply made with plywood and paint.

"I don't make a whole lot of money but it is my hobby. And I've had a lot of people really compliment me on my work, how nice it is and stuff and makes you feel good," Harvey said. Prices range on the pieces, and many are sold in sets. The most popular pattern this year has been The Grinch.

The wooden art pieces are displayed in the Fogle's front yard on Acacia and Marks in Northwest Fresno. When they catch the eye of a driver, Mary greets them and handles the selling/financial aspect of the business.

"People like them, and it always amazes you that people are so excited," Mary said. "We had one lady tell us that they wanted to make it a family tradition now with their kids to come purchase."

The Fogles were aided this year by Kristen Willems and her husband, who helped them put their work on Facebook. The move resulted in Harvey's nearly selling out weeks before Christmas.

"This is the first time in my doing all of this, that I've sold out this quick," Harvey said. His art can be seen in yards around town, including on Christmas Tree Lane and at the Fresno Chaffee Zoo.

"You don't really, you know, realize what you're doing until you drive around town and you happen to see somebody that has bought some of your stuff, and they're displaying it," Harve said. "It makes you really feel good. Like you've done a good job."

Harvey says he'll be busy with current orders until Christmas, but is accepting pre-orders for next year. He's already getting started on pieces for 2020. The couple says they plan to keep making signs as long as they can.