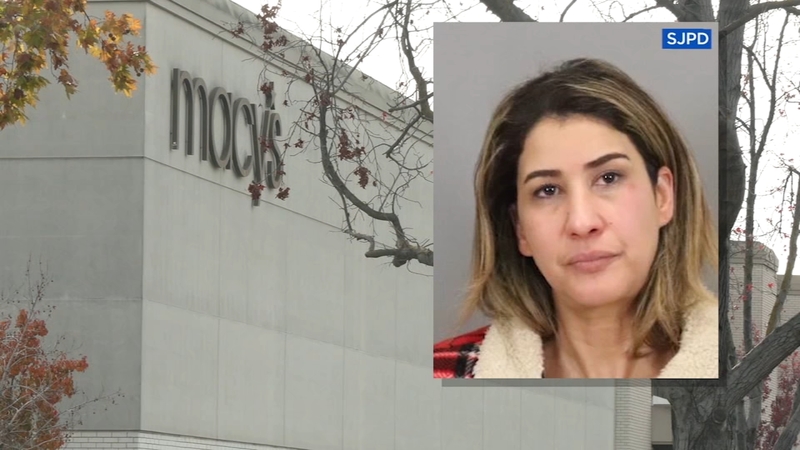 Woman arrested for interfering with SJPD's arrest of Macy's thief

SAN JOSE, Calif. (KGO) -- An organized retail robbery in the South Bay ended with upwards of 15 suspects getting away from police.

As holiday shoppers got their last minute items at Oakridge Mall, San Jose Police started their investigation into another mass robbery.

Police say the suspects attempted to rob a Macy's at Oakridge Mall of more than $1,000 of merchandise. The same store was hit in a November robbery.

A picture from police showcases some of her injuries. SJPD says she was pulled down by her hair, punched and kicked in the head.

43-year-old Abeer Hamed was arrested for delaying an officer, helping a person escape lawful custody and for assault on an officer and the last remaining suspect fled the area.

A brazen armed robbery was caught on camera outside an Oakland hotel Thursday evening when a San Francisco man was unloading his car to check-in.

Police do not believe she was associated with the suspects who robbed the Macy's.

"Arresting this one suspect could've helped our investigation to identify the rest of these folks," Sgt. Camarillo said. "That didn't happen, obviously, because this one person interfered with this arrest. We still don't understand what caused this person to go over there and interfere. If somebody sees something that they don't agree with or thinks is excessive, there's mechanisms for that, right? We have our internal affairs department, we have our internal police auditor. Please, please do not insert yourself into one of these arrest situations."

"We're using all available resources to curtail this activity," Sgt. Camarillo said. "As we saw, we were there pretty quick after this incident was reported to us and we will keep responding."

If you have any information about the robbery, please contact SJPD.