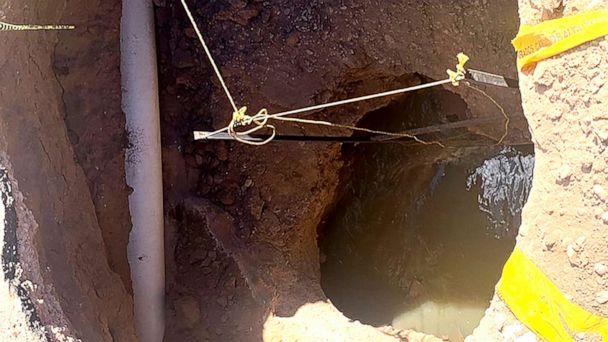 Crews from the Phoenix Fire Department have returned from helping local authorities search for a man who fell into a sinkhole and was swept away in a storm drain.

The incident happened last Monday when a large sinkhole opened up in Hermosillo, Mexico, and the man was swallowed up by it and carried away by the underground water currents.

Phoenix, a sister city to Hermosillo, sent technical advisers from the Phoenix Fire Department to help with the rescue operation on Friday morning, according to ABC Phoenix affiliate station KNXV. The group returned from assisting the authorities in Hermosillo this weekend.

Officials said that there are several different drainage pipes that the missing man could have been carried through so authorities are currently searching those pipes in hopes of finding him.

Authorities from Jaurez were also sent to Hermosillo to assist with the Phoenix Fire Department and other local authorities, according to KNXV, citing a press conference that was streamed by news organizations in Mexico.

"The Phoenix Fire Dept advisory team along with Councilman Nowakowski and Councilwoman Guardado have returned safely from Hermosillo Mexico. The team was able to assist and lend their technical expertise to the responders in Hermosillo in a complex rescue operation of a missing adult male that fell into a sink hole and was swept underground into a storm drain. Through our Sister Cities program, and with the generosity of Cutter Aviation, our members were able to make the trip and ensure operations were conducted effectively and safely," the Phoenix Fire Department said in a post on Facebook.