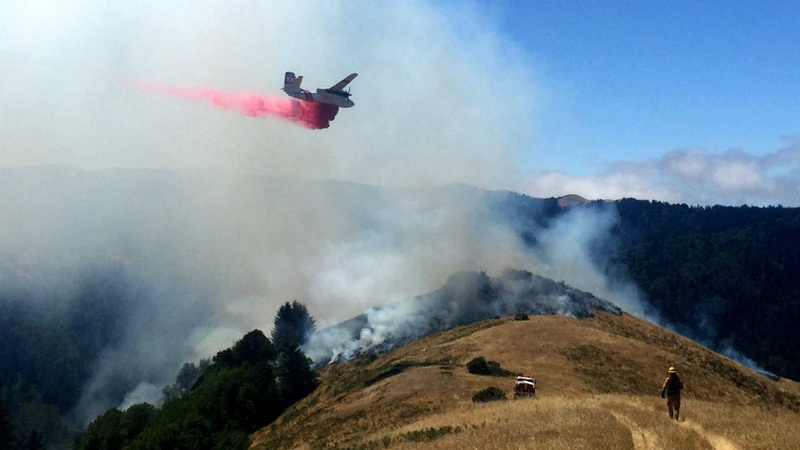 WOODACRE, Calif. (KGO) -- In the lineage of California wildland fires, the 38-acre blaze named the Pine Fire will not go down in any history books for being memorable. It began above Woodacre at 10:30 Tuesday morning beneath power lines that probably sparked. It's a common cause.

"Typically the wind blows and causes the wires to slap," Marin County Deputy Chief Mark Brown said. His agency went after the fire early, with helicopters and tankers.

The terrain is so touch that two fire trucks blew tires getting out there. The agency is grateful that what happened today did not occur during last week's triple-digit heat wave.

"If it has been hot and we had seen winds, we would be actively fighting 400-500 acres," Brown said.

Much of Marin County faces an underlying threat because much of the region has not burned in 50-60 years. That's decades-old fuel, the year after a drought.

"In 1945, a fire burned from Novato to Woodacre," Deputy Chief Brown noted. "In 1929, a 2,000 acre fire burned through a footprint that now contains thousands of homes. And, they are surrounded by that old fuel."

Those are sobering thoughts at the beginning of a fire season.

#Pine Fire now at 50% containment according to @marincountyfire. Began with spark from power lines. #abc7now

Approximate location of #PineFire in #MarinCounty in relation to villages in San Geronimo Valley. pic.twitter.com/6JY2uDHzeq