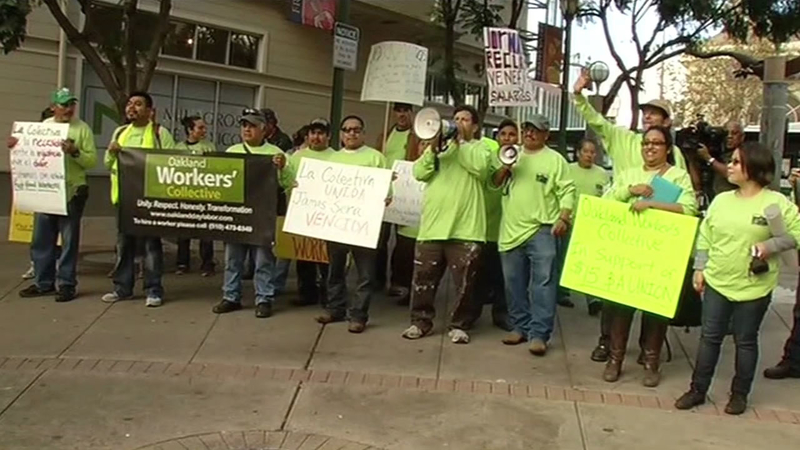 OAKLAND, Calif. (KGO) -- Nationwide and here in the Bay Area, workers held protests and strikes demanding higher minimum wages on Thursday. They are fighting for $15. While San Francisco residents recently voted to increase the city's minimum wage to $15 by 2018, the state is now trying to do the same, but is encountering some opposition.

Workers in Oakland took to the streets demanding a higher minimum wage and a chance to unionize.

San Francisco voters approved a hike. The current minimum wage is $10.74 an hour. The city will see incremental increases through July 2018 when it will reach $15 an hour.

San Jose and Richmond also voted to increase wages. But at the state level, workers will have to wait until 2016 to see it hit $10 an hour.

State senator Mark Leno recently introduced another bill with the hopes of increasing the state's minimum wage to $13 an hour by 2017.

"When consumer, especially low wages workers, have extra money in their pocket, because they are no longer paid a poverty wage, they spend everything, just to make ends meet. That means more dollars circulating within the economy," said Leno.

But some employer groups have said raising the minimum wage would cause layoffs and some businesses would go under.

"The economic climate hasn't really come back for small businesses so there is apprehension on how they cover any additional costs," said Toccoli.