The mountain lion was wearing a tracking collar, so it is known to state wildlife officials.
KGO
By Amy Hollyfield and Jobina Fortson 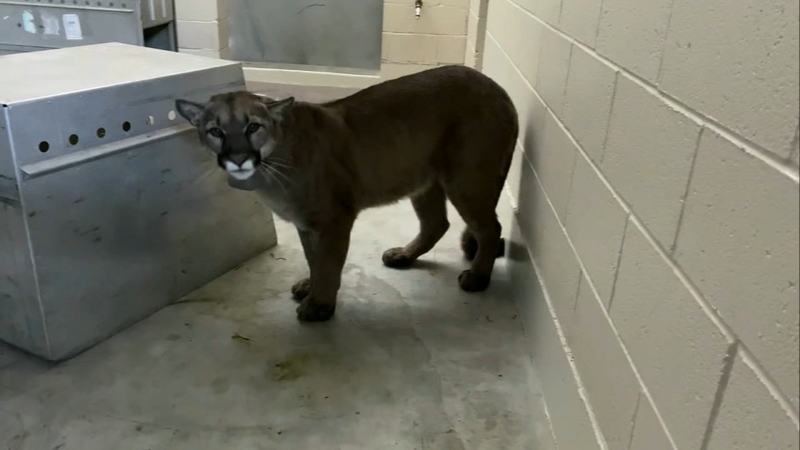 SAN FRANCISCO (KGO) -- Veterinarians at the Oakland Zoo examined the mountain lion found and captured in San Francisco late Wednesday night and say he is young and healthy.

"This is a beautiful two-year-old male mountain lion. He looks very healthy and he has been radio collared by UC Santa Cruz, so we know a little bit about him. Looks like he came out of the Santa Cruz Mountains and got lost in San Francisco. He's young so he probably recently separated from his mother," said Dr. Alex Herman, Vice President of Veterinary Services at the Oakland Zoo.

California Fish and Wildlife crews safely removed the mountain lion found in a tree after someone parking their car spotted it at around 10 p.m. Wednesday night at Santa Marina Street near Mission Street near the Bernal Heights neighborhood.

State officers used a dart to tranquilize the big cat. It then fell asleep on the porch under the tree, and brought him to the Oakland Zoo.

The mountain lion is presumably the same one spotted in the city's Portola and Bernal Heights neighborhoods on Tuesday morning.

Our vet and animal care staff examined the mountain lion rescue we received last night. The 2-year-old male is in great overall health! After his exam & vaccines, he was sent along with our best wishes with @CaliforniaDFW to be released in a safe space in Santa Clara County. pic.twitter.com/wWhMWjhp5a

The mountain lion was wearing a tracking collar, so it is known to state wildlife officials.

"I think I have called him Mr. Handsome several times! That's the name that came to mind," she said.

Mr. Handsome has been busy. Cameras have caught him roaming the streets of San Francisco's Bernal Heights and Portola neighborhoods, walking right alongside parked cars, strolling through backyards, even checking out someone's front porch.

A spokesperson for The Puma Project says they put a tracking device on him shortly after he was born to study mountain lion behavior. They say his long distance travels are normal as he looks for turf to call his own.

Officials will now take him back out into the wild and hope this time he stays there.