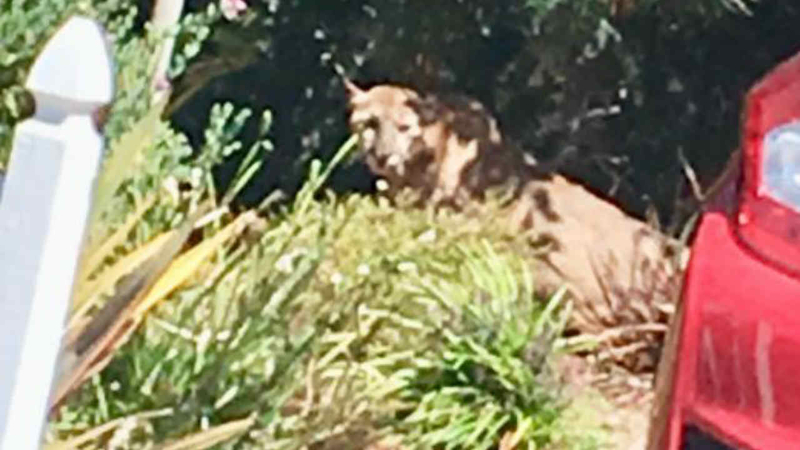 SAN MATEO, Calif. (KGO) -- An entire neighborhood in San Mateo was on lockdown for about six hours Monday after a confirmed sighting of a mountain lion in a residential area. Residents said it did not act aggressively, but an all-out effort was launched to find and relocate it.

About 800 homes in a mile and a half radius were put on alert that the mountain lion had been spotted, first in a driveway, and then a short time later, around the corner in the back yard of a home on Virginia Avenue.

San Mateo Police exercised patience and care in trying to find the mountain lion, working with a warden from state fish & wildlife. The neighborhood is entirely residential, bordering Hillsborough.

"We didn't get too close and we didn't scare the animal or make a lot of loud noises because we didn't want the animal to feel threatened or felt like it was being attacked as I think it would have either ran away or became aggressive, so we tired to minimize the impact on the animal," said San Mateo Police Sgt. Amanda Von Glahn.

The mountain lion was first reported about 9:35 a.m. with word spreading fast on social media for residents to shelter in place. Andy Fest and his six and a half year old son Connor happened to be driving by as police search teams swept in.

"We were sitting in our car, and officers were coming across the street, guns drawn," said Fest. "It was pretty amazing to see it."

By early afternoon, the mountain lion had been located at the end of a long driveway. State warden Mike Harris said a tranquilizer gun had been used to sedate the animal-seen asleep here after its capture but still stirring a bit. It was a young female, weighing about 85 pounds.

San Mateo Police Chief Susan Manheimer told reporters that it was never anyone's intention to hurt or kill the animal, but to return it back to the woods.

"She will be relocated to one of the native areas right around here and be tracked by the Puma Project," said the Chief.

The Puma Project is a partnership of U.C. Santa Cruz and the California Department of Fish & Wildlife. It tags and tracks mountain lions to study their movement and numbers. Three years ago, San Mateo had another confirmed sighting and capture of a mountain lion in its Central Park in the downtown area.

The mountain lion has been found and tranquillized, per @SanMateoPD in the Baywood neighborhood near Alsneda & Virginia Ave. #abc7now