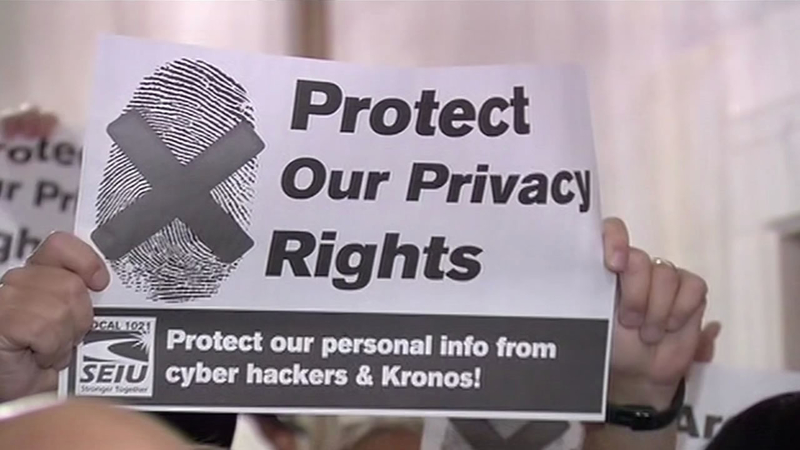 SAN FRANCISCO (KGO) -- City employees who work at the fine arts museums in San Francisco stormed City Hall Tuesday to protest a biometric time clock that will soon keep track of when then come in and out. This raises big trust and privacy issues for employees.

City employees who work at the museums were joined by fellow union members demanding an end to using a person's thumbprint to record when they come in and when they leave work.

The De Young Museum and the Legion of Honor have had the system in place for non-city employees since 2013 and suspended it for those city employees who are union members. But now they want to reinstate it for all.

"They can't trust us and we're security, we take care of the building, the artwork and patrons and staff," said employee Rayna Johnson.

At City Hall, workers took the petition to the mayor's office. Outside, Supervisor Eric Mar promised to introduce a resolution that would halt the use of a biometric time clock at the museums or any other city agency.

"The Board of Supervisors has concerns about privacy like the workers do and whether this new technology could be used safely," said Supervisor Mar.

But ironically it was the board of supervisors who several years ago demanded that the fine arts museums do a better job at keeping track of their city employees.

A spokesperson for the museums released this statement:

"After doing our due diligence, we decided to use a biometric time clock which is the best, most secure time-keeping system available."

Many employers are concerned about hackers getting into the system and stealing that information once they have the fingerprint.

"It could actually recreate someone's identify and access their place of employment, their bank records anything that is using their laptop and using fingerprinting identification for the person," said Jill Bronfman with UC Hastings College of the Law.

SF city workers flood city hall to protest use of thumbprints to clock in & out at city museums.@deyoungmuseum @SEIU pic.twitter.com/XcjwKVN4xW