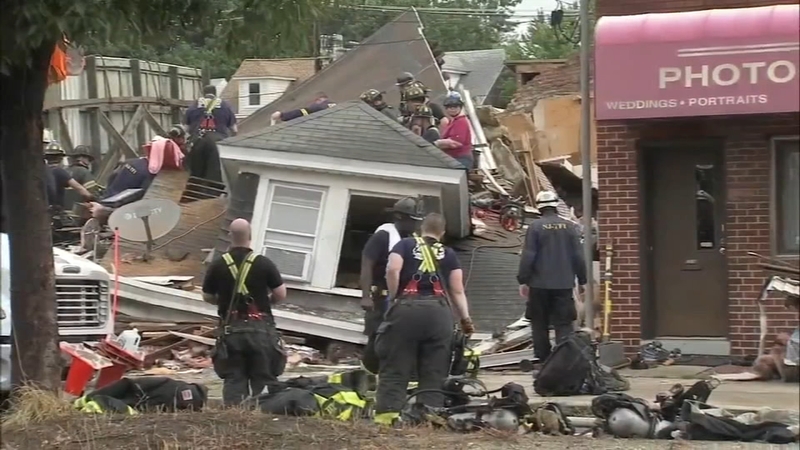 The fatal victim has been identified as 38-year-old Tika Justice. Her daughters, ages 16 and 20, survived and are now hospitalized.

Justice was found on top of her teenage daughter, officials said. The 20-year-old was found chest-deep in debris when first responders arrived.

James Feig was the first one at the scene after the three-story home collapsed around 6:50 a.m. Monday on the 1800 block of South Broad Street, near Joseph Street.

"I rode up to it, went back behind the billboard, and there was a lady buried in the rubble," Feig said.

He found the woman trapped from the waist down. He took a picture after attempts to try and free her were unsuccessful.

"She had the phone in her hand; she was talking to dispatch," Feig said.

Feig said they tried to call out to others who were trapped.

"No response. So they either couldn't hear us or were unconscious," Feig said.

But Feig continued to try to help and comfort the woman who was partially exposed.

"Soon as I saw the fire truck come up the road I told her 'here comes the fire truck, hold on.' It brought tears to my eyes," Feig said.

Hamilton police and other first responders arrived on the scene to what they describe as a full structural collapse. They pulled three residents from the home, including the woman who called 911. She was rescued first.

"What they gathered from the 911 call was that the 20-year-old victim awoke, heard cracking in the house, started screaming," said Captain Ferdi Mather.

Though most residents tell Action News they did not hear an explosion, they only heard the collapse itself. PSEG was on scene to shut off gas lines which is standard procedure for these types of incidents.

The cause of the collapse has not been determined at this time and is under investigation.

For more stories, photos, and video from around the country and the world, visit this page.

Mercer County, NJ 3-story home collapses this morning with at least 3 residents inside. @PSEGNews is on scene to shut off gas as is standard procedure. No word on injuries or cause of collapse yet. @6abc pic.twitter.com/hf0Ka0SjvY