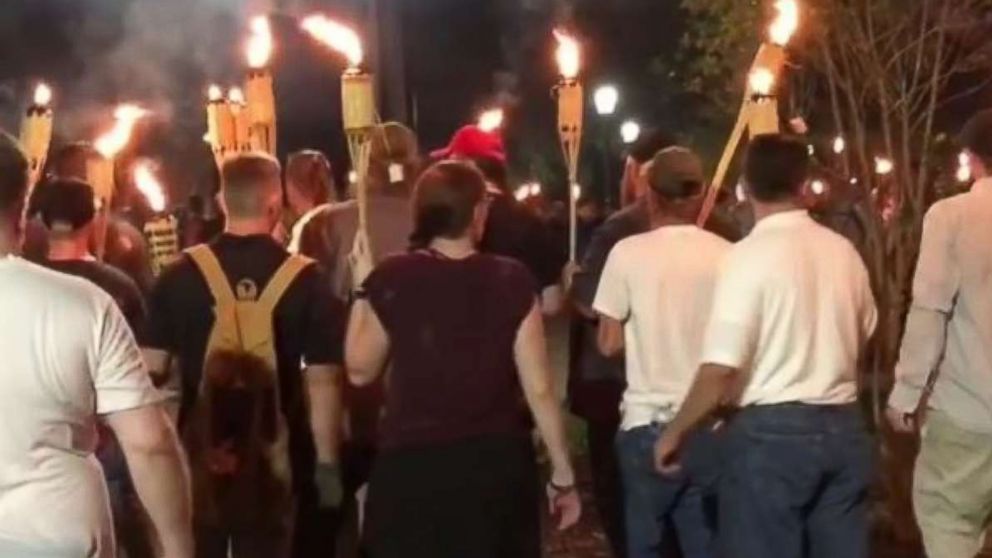 CHARLOTTESVILLE, Vir. -- A far-right Unite the Right rally in Charlottesville, Virginia has prompted a state of emergency there.

On Friday white nationalists held tiki torches through the University of Virginia in Charlottesville ahead of Saturday's rally.

Chanting "white lives matter," "you will not replace us," and the Nazi-associated phrase "blood and soil," some of the white nationalists engaged with counter-protesters and scuffles broke out.

Police arrived on campus, declared it an unlawful assembly, and ordered the crowds to disperse.

It is unclear if anyone was injured or arrested.

Teresa A. Sullivan, president of the University of Virginia, said in a statement Friday, "I am deeply saddened and disturbed by the hateful behavior displayed by torch-bearing protesters that marched on our Grounds this evening. I strongly condemn the unprovoked assault on members of our community, including University personnel who were attempting to maintain order."

Sullivan added, "Law enforcement continues to investigate the incident, and it is my hope that any individuals responsible for criminal acts are held accountable. The violence displayed on Grounds is intolerable and is entirely inconsistent with the University's values."

Charlottesville Mayor Mike Signer said in a statement of the torch-bearing white nationalists, "I have seen tonight the images of torches on the Grounds of the University of Virginia. When I think of torches, I want to think of the Statue of Liberty. When I think of candlelight, I want to think of prayer vigils. Today, in 2017, we are instead seeing a cowardly parade of hatred, bigotry, racism, and intolerance march down the lawns of the architect of our Bill of Rights ... I am beyond disgusted by this unsanctioned and despicable display of visual intimidation on a college campus."

Sen. Orrin Hatch, R-Utah, chimed in, tweeting of the torch-bearing white nationalists, "their ideas are fueled by hate & have no place in civil society."

The Unite the Right rally, slated to take place in McIntire Park, is in part a response to the city's decision to remove a statue of Confederate Gen. Robert E. Lee from a municipal park. A judge on Friday ruled that the rally could continue at the permitted location, even though the city had asked it be moved to a larger venue.

In a statement Friday he said, "Many of the individuals coming to Charlottesville tomorrow are doing so in order to express viewpoints many people, including me, find abhorrent. As long as that expression is peaceful, that is their right. But it is also the right of every American to deny those ideas more attention than they deserve."

And the Anti-Defamation League said the rally is "the latest indication that the darkest corners of society are emboldened to come forward and openly parade their bigotry on main street. Hate has no place in our communities."