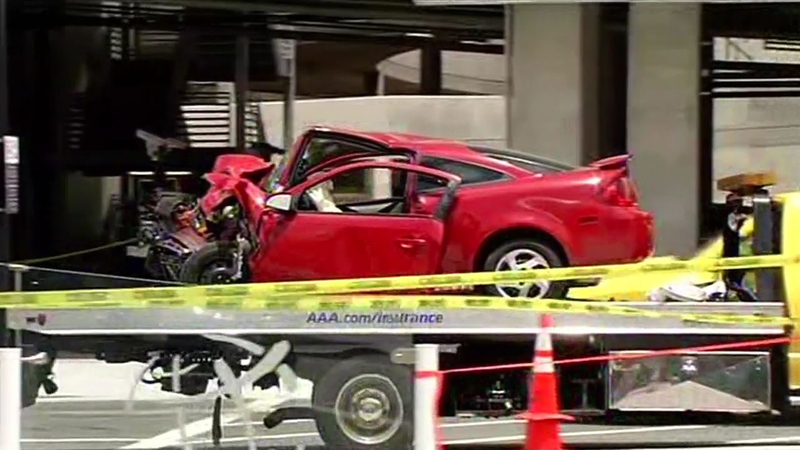 A solo female driver died and five other people were hurt when their vehicles collided outside the parking structure at Terminal B, on Wednesday just after 10:30 a.m.

"I figured something bad had happened, because of all the tape and the police vehicles, but I had no idea it was a tragedy of this sort," said Larry Ganton, a local resident.

#UPDATE: Woman (driver) who died was 25, per #SJPD. 5 ppl, inc. infant, in other SUV were taken to local hospital. pic.twitter.com/waeqxNSsaJ

The woman, whose name is not yet being released, was speeding south in a red two-door Pontiac when she struck a silver Audi SUV that was turning left into the parking structure, San Jose police Officer Albert Morales said.

The driver of the red car, a 25-year-old woman, was pronounced dead at the scene.

The family in the SUV were taken to a local hospital, all with non-life threatening injuries.

"We all want to get where we're going, we all have obligations we're trying to meet on a timeline," said Julieen Crane, a Gilroy visitor.

She hopes people will learn a lesson from this accident. "No moment's more important than right now, and they get so involved with what they're on the way to," she said.

Investigators cleared the area four hours after the crash.

"Sometimes, these are the results of people not being careful, and driving slowly. We don't want this to happen to anybody else. Any time you have a traffic fatality, that's just one too many," said Morales.

Police are hoping surveillance video will help them in their investigation.