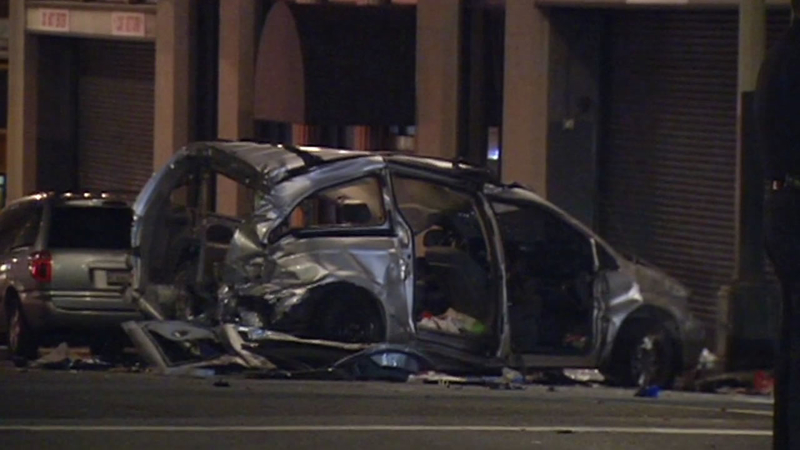 SAN FRANCISCO (KGO) -- A San Francisco neighborhood is cleaning up Tuesday after a terrible chain reaction car accident on Post and Jones streets. It sent six people to the hospital and resulted in two people being arrested.

It happened about 10:15 p.m. Monday when San Francisco police tried to pull over a minivan for a traffic violation. Officers say the driver sped off and ran a red light before hitting a taxi cab. The taxi then hit two people on the sidewalk and a pole. The pole fell over and hit one of the victims who was riding a bike.

"I was just chilling in my kitchen and I heard this huge crash that sounded that sounded like a freight train coming through," said witness Emery Dawdell.

Dawdell says he can't get the victims off his mind. Six people were taken to the hospital. One, an innocent pedestrian is on life support.

"It affected me deeply. I feel bad for these people. I prayed for them and today I just want to make sure everything is cool," added Dawdell.

"He was severely traumatized. I didn't see what happened, but he was on the ground and his bike is over there, kind of mangled so we can only imagine. They were aggressively trying to resuscitate him," said witness Andrew Small.

Police say the suspect ran away, but left a woman behind in the car.

"She was like help me, somebody help me please. I think they eventually sorted her out. They took her in an ambulance," said witness Vince Danko.

The taxi driver and his passenger are expected to be okay and so is one of the pedestrians, but the bicyclist is on life support.

The car crashed into a window on the bottom floor of a 30 unit apartment building.

"Inside, my studio is all damaged from the glass and all that," said building manager Chuck Drees. He uses a room as a painting studio and is now trying to repair and secure the building.

"I can't imagine. It had to be going really fast. There's glass all over the place. There's brick damage,"added Drees.

Police say they caught the driver when he boarded a Muni bus. The minivan the suspects were in was a stolen vehicle.
Related topics:
san franciscounion squarecar crashhit and runcrimepedestrian strucksfpdpedestrian injuredstolen carhit and run accidentcrashtaxi
Copyright © 2021 KGO-TV. All Rights Reserved.
More Videos
From CNN Newsource affiliates
TOP STORIES