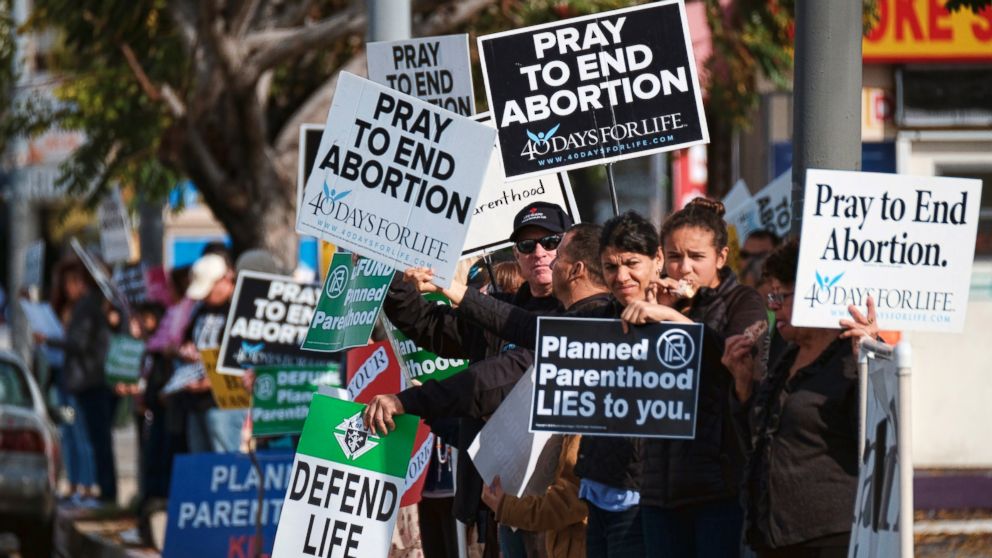 From Pennsylvania to Tennessee to California, hundreds of protests of varying size against Planned Parenthood -- and counterprotests in support of the nonprofit health organization -- took place across the country Saturday.

#ProtestPP, a national coalition opposed to abortion rights that seeks to end any public funding for Planned Parenthood, said more than 200 rallies were planned in 45 states.

"The time has come to defund America's abortion giant," #ProtestPP states on its website. "Join us at the Planned Parenthood facility in your community as we protest and pray for an end to Planned Parenthood's massive government subsidy, and an end to abortion in our country."

ABC News reached out to the organizers for comment but has not heard back.

"Patients don't go to Planned Parenthood health centers to make a political statement -- they go to receive quality care from a provider they know and trust," Carter said in a statement today. "That's what we're focused on today and every day."

Planned Parenthood supporters also rallied Saturday in a show of solidarity with the nonprofit, which provides a variety of health services including cancer screenings, HIV testing and STI/STD treatement as well as family planning, birth control and abortion.

Carter expressed gratitude for the counterprotests, though she cautioned in a statement against rallies being held immediately outside the organization's health clinics.

"We are grateful for the incredible outpouring of love and support we've been seeing all across the country," Carter said in a statement today. "We do ask anyone wishing to show support for Planned Parenthood and our work not to rally outside of a health center, unless you are directed to by the local health center or affiliate staff. These rallies can often be intimidating, and can inadvertently prevent patients from getting the care they need. Instead we encourage supporters to attend events away from health centers, become a patient escort, or rally outside their elected officials offices."

Planned Parenthood serves more than 2.5 million patients each year in more than 650 health centers across the country. Abortions account for 3 percent of its services, according to the organization's annual report from Oct. 1, 2013, to Sept. 30, 2014. The bulk of its services -- 45 percent -- were for testing and treatment of sexually transmitted infections and diseases, and contraceptive services accounted for 31 percent.

Planned Parenthood received $553.7 million in federal funds in the fiscal year that ended on June 30, 2014, its largest single source of money. Most of that comes through Medicaid reimbursements for preventive health services such as HIV testing and cancer screening, the organization says. Another $353.5 million of the group's funding came from private contributions, and $309.2 million from other nongovernment sources.

Federal law, specifically the Hyde Amendment that was first passed in 1976, bars government dollars from paying for abortion services except in cases where the woman's life is in danger or if the pregnancy is the result of incest or rape.

Republican lawmakers in states across the country have proposed bills to cut off public funding to any organizations that offer abortions, a move that Planned Parenthood supporters say would threaten the availability of the organization's health services to women.

House Speaker Paul Ryan has pledged that Republicans will complete legislation to repeal and replace the Affordable Care Act this year and that he expected legislation to defund Planned Parenthood would be included.

In January 2016, then-President Barack Obama vetoed legislation that sought to repeal the Affordable Care Act and strip all federal funds from Planned Parenthood.

Saturday's protests follow the 44th March for Life on January 27, when tens of thousands of people gathered in Washington, D.C., for the annual anti-abortion rights rally. Vice President Mike Pence, a longtime opponent of abortion rights, who as governor of Indiana signed some of the nation's strictest laws regulating abortions, was the first-ever vice president to address the crowds at the March for Life.

Pence told the cheering supporters on the National Mall, "Life is winning again in America."