The plane came in for a landing at just before 11:30 in the morning. It crashed with 291 passengers and 16 crew members on board.

Emergency crews jumped into action at the airport.

"By the time we removed the final victim, the conditions were that the fire was banking down on us, we had heavy black smoke," Emmons said.

At San Francisco General Hospital, Dr. Mary Margaret Knudson was preparing to be inundated with severely injured patients. "As I ran downstairs to the emergency room, two of the critical people -- the initial ones -- were actually passing me going into the trauma bay," Knudson recalled.

Though 181 passengers suffered some kind of injury, only 12 were considered critical.

Still, Knudsen said, "You think you're ready and you walk down and you see this enormous disaster unfolding in front of you. You kind of have to take your own pulse for a second."

Of the 307 people aboard, only two passengers died at the crash scene. Both were high school students from China. One was run over twice by a San Francisco Fire Department crew. A third person died in a hospital several days later.

Among the passengers on board that day were Zhang Jing and her husband Yang Lin. They were traveling to San Francisco from Shanghai on their dream vacation.

"We suddenly crashed and I thought, 'Today, I will probably die here,'" Lin said. "We impacted hard, everything shook and things fell down and all the lights went out."

Jing broke down, unable to describe that day.

Lin took pictures and this video of the scene as he watched emergency crews treat his wife. She fractured her ankle and a CT scan revealed massive bleeding on her brain. Surgeons removed part of her skull to relieve the pressure.

The couple is now back in Shanghai. "My wife has been in rehabilitation. The brain injury is also recovering," Lin said.

Lin said Jing still struggles with memories of that day. She has returned to work part time.

Like many of the passengers injured in the Asiana crash, the couple is now waiting for multiple lawsuits to be settled.

Different lawyers have filed cases for all but a hundred passengers. Those cases are against Asiana, Boeing and Aircruisers, the makers of an inflatable slide that failed to deploy after the crash.

Asiana Airlines was fined $500,000 by the U.S. Department of Transportation for providing inadequate aid to crash victims' families.

In late June, the National Transportation Safety Board released its final report on the crash along with an animation showing how the pilots made 30 errors that led to the accident.

"In this instance, the flight crew over-relied on automated systems that they did not fully understand," NTSB's acting chairman Christopher Hart said. "As a result, they flew the aircraft too low and too slow and collided with the seawall at the end of the runway."

The NTSB cited contributing factors as well including the complexity of Boeing's auto-throttle, which it says was inadequately described in its training and operational manuals.

The airline believes multiple factors are to blame for the crash. Boeing denies any fault.

There is an NTSB finding that may be reassuring to many fliers. Seatbelts aboard Asian flight 214 saved hundreds of lives. Two of the three victims killed in the crash were not buckled in and were ejected from the aircraft. 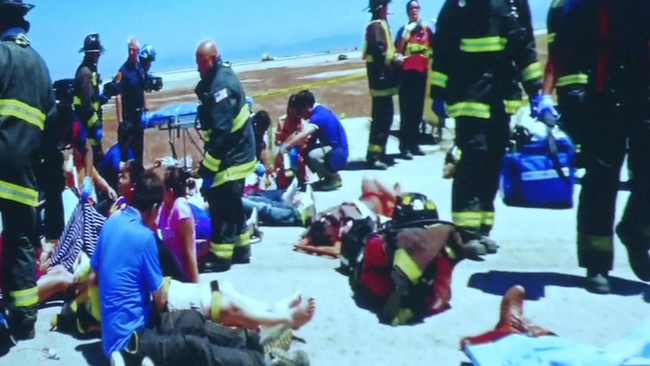