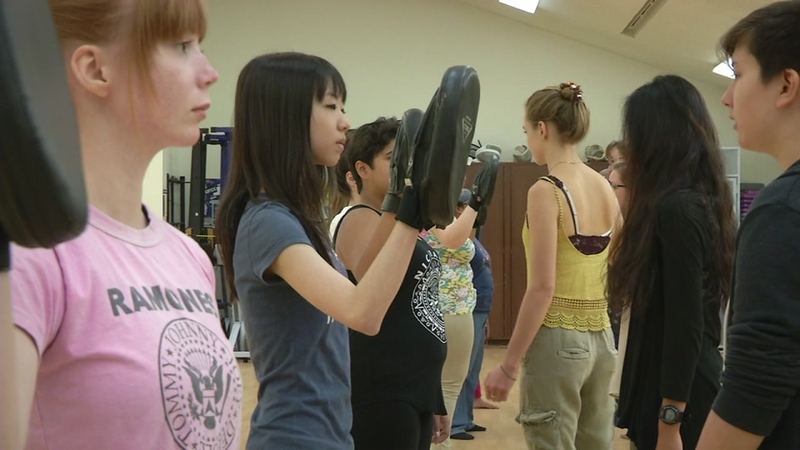 OAKLAND, Calif. (KGO) -- With sexual assaults on college campus' making national headlines a growing number of women at Bay Area colleges are taking action to protect themselves. At a self-defense class at Mills College in Oakland many are first year students, like Saly Entislia.

"I wanted to learn to be able to defend myself against both physical and mental attacks, but I also wanted to also have a way to like communicate with my body and learn how it feels to listen to the signs that something's wrong," says Entislia.

Self-defense classes for women are now offered at nearly every college in the Bay Area. And while tactics may differ, the goal is most often the same.

"The philosophy is that the best thing to do is to get out of the situation whatever it is, if it's a party, if it's a club, if it's you know your room," says instructor Christine Schoefer.

Schoefer teaches an empowering skill set that's both physical and mental. Students recite along with targeted phrases from, "I didn't agree to that," to "Stop calling me that," to "I don't want to have this conversation right now."

Sometimes it's enough to head off trouble.

"I've had to yell in someone's face before but I've never had to get physical," says student Xiomara Hooker.

But if that moment comes, the self-defense moves homed by the Hand To Hand Kajukenbo self-defense school in Oakland are designed to be quick, accurate and effective.

"Palm heal to the nose or chin to disarm you," explains Hooker, demonstrating one technique.

And while they're training to defend themselves, students in this class are also learning to defend each other, with the power of numbers.

"What I do encourage them to do is to get an ally bring someone with you. Tell that person to keep an eye on me, tonight is going to be my turn to drink, next time it's your turn to drink, right, so they're not alone," says Schoefer.

"It's just important to know your situation and figure out the best influence to stop any possible problems," says Saly Entislia.

Heading off problems with a combination of physical and mental strength.

Click here for more information on the Hand to Hand Kajukenbo self-defense school.