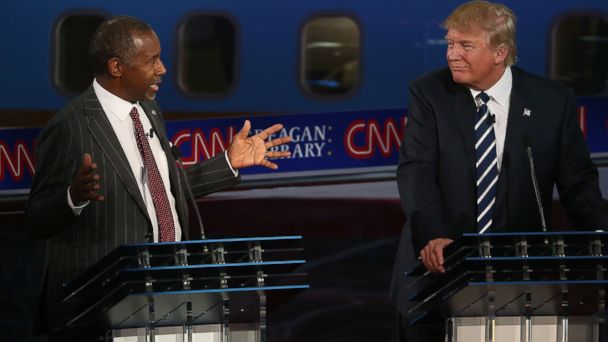 Controversial statements about vaccines by Republican presidential frontrunners Donald Trump and Dr. Ben Carson have angered medical groups and experts who are calling the statements "false" and "dangerous."

During the GOP candidates' debate Wednesday night, Trump reiterated statements he had previously made, associating autism with vaccines, despite the fact that medical studies have widely shown there is no proven link between the two.

"Autism has become an epidemic -- 25 years ago, 30 years ago you look at the statistics, not even close," Trump said. "It has gotten totally out of control."

The Republican frontrunner then said an employee of his had a child who became autistic shortly after getting vaccinated around age 2.

"I am totally in favor of vaccines but I want smaller doses over time," Trump said.

Carson, a former neurosurgeon, refuted the claim that autism and vaccines were linked, saying that had not been proven in studies. But he then said the current recommended vaccine schedule for children could be spaced out.

"We have extremely well-documented proof that there is no autism associated with vaccinations, but it is true that we're giving way too many in way too short a time and a lot of pediatricians recognize that," Carson said.

"Claims that vaccines are linked to autism, or are unsafe when administered according to the recommended schedule, have been disproven by a robust body of medical literature," said AAP Executive Director Dr. Karen Remley. "There is no 'alternative' immunization schedule. Delaying vaccines only leaves a child at risk of disease for a longer period of time; it does not make vaccinating safer."

The Autism Science Foundation pointed to the recent California outbreak of measles, which infected at least 125 people, as one possible result of spreading misinformation on vaccines.

"The facts are clear. Vaccines do not cause autism," Alison Singer, president and co-founder of the Autism Science Foundation, said in a statement. "Some people may not like the facts, but they don't get to change them, even if they are running for President of the United States."

"I'm a pediatrician. I know how harmful this kind of misinformation can be," Besser said. "The suggestion by politicians that there is an acceptable alternative vaccination schedule that is safer and as effective as the recommended schedule will lead some people to delay vaccination."

Dr. Max Wiznitzer, a pediatric neurologist and autism specialist at University Hospitals Rainbow Babies and Children's Hospital, said he's concerned that parents who may already be skittish about vaccines may use these statements as a reason to delay vaccinations.

"One of the main reasons for the schedule is children need to be immunized against vaccine-preventable diseases as soon as possible," Wiznitzer said. "The longer you stretch out the schedule, the more likely they will be infected."

"The criteria [for diagnosing autism is] looser," said Wiznitzer, noting that many people who would not have been considered autistic decades earlier are now diagnosed with the condition. "We're better at recognizing it. ... [And] the risk is higher when you have older parents and people are getting married at older ages."

Wiznitzer said there is one good outcome of having to deal with persistent claims that autism and vaccines are linked -- there is now robust data on the subject refuting the claim.

"One of the good things about the questions being asked is people have done research to provide answers," he said. "[We] have a heightened level of awareness ... about how can we further improve vaccines."