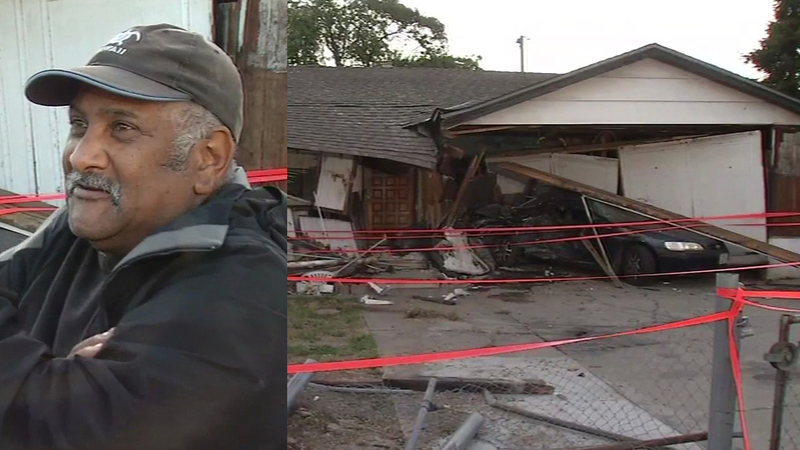 SAN JOSE (KGO) -- Lightning may not strike the same place twice, but apparently in San Jose, cars don't follow that same logic. One home seems to be a magnet for crashes.

This crash created a huge mess and there is a lot of cleanup to come. Thankfully the homeowner has insurance a process that he has become familiar with over the years.

You don't see this every day, but if you're Ray Minter, you see it more often than most.

"We've been hit one way or another nineteen times. Four have gone through the house," said Minter.

Minter has lived here on South Jackson Avenue since the 1950s. He believes last night's crash was the worst.

A man driving a GMC Sierra pickup truck sped down the I-680 Jackson Avenue off ramp, sailed right through the intersection, through Minter's chain link fence and concrete poles and into his parked Honda accord, before coming to a stop inside the garage.

Ray say the driver appeared to be heavily intoxicated but uninjured. A witness says the driver was checked out, put in handcuffs and taken away by police. Minter and his mother were in the back of the house at the time of the crash and were not hurt. However, their cat is missing and feared dead.

"The first one shocks you and then after that you know as long as nobody in the house is hurt you don't care because everything is going to get repaired," said Minter.

This morning, everyone was checking in with Minter. His neighbor, Perry Taylor, has lived next door since 1963 and has literally seen it all.

So the obvious question for Minter? Will you move? He says no, he's been here too long.

"We just stay in the back of the house and watch everything, make a ski ramp, or something, I don't know," said Minter.

"Do you have any advice for him?" asked ABC7's Matt Keller.

"No just pray. Just pray and keep living and it'll be alright. Put some bigger poles in the ground," said Perry Taylor, next door neighbor.

Minter isn't alone; the house across the street has been hit twice in the past six months.

Homeowner on S Jackson Ave in San Jose says 19 crashes happened at his house since 1960.
Latest one of the worst. pic.twitter.com/O51VFcghKz