KGO
By Wayne Freedman
OAKLAND, Calif. (KGO) -- With the cause still unknown, investigators Monday returned to the scene of an Oakland fire that burned a 196-unit apartment building under construction late last week.

In the three days since Friday's blaze, nearby residents and businesses are struggling through the aftermath.

"Easily someone could have died. It was an inferno, you know," one neighbor said.

DroneView7 got a look at the aftermath of a four-alarm fire that destroyed a building that was under construction in Oakland's Uptown neighborhood last week.

Up to this point it's been a suspicious mystery, which could explain the presence of the Alameda County District Attorney's office, and the federal Bureau of Alcohol, Tobacco, and Firearms, among others.

"And it is puzzling because I don't know what I can do and cannot do," evacuee Pamela Caryl said.

Neighbors left in such a hurry Friday morning that they did not have much to bring back, today. This is the view outside Tuala Garcia's front window. She lived with construction for a year, and now faces demolition and reconstruction - if she's lucky.


"We are going to try to stay here but our landlord is quadrupling our rent," Garcia said.

Until the fire, it had been a gentrifying neighborhood. Rising rents are the reason many neighbors suspect arson.

"Some say it is good for us. Some say not. Some say it leads to displacement and higher rents," neighbor Rarik Kazelah said.

Whatever the reason, it has led to hard times for a row of small eateries on 23rd street.

At noon, when El Burrito Gordo should have been filled with construction workers, it looked like a ghost town instead. 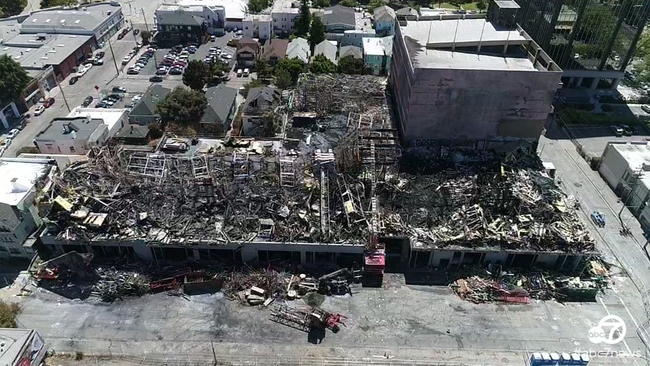