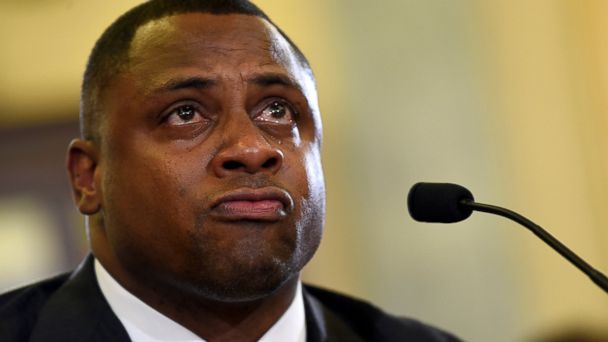 At an emotional congressional hearing on domestic violence in major sports leagues in the wake of the Ray Rice case, top sports executives testified that they had grown up with battered moms.

Troy Vincent, a former NFL player and current executive vice president of football operations, recounted his own experience with domestic violence, his voice breaking and tears welling in his eyes.

"My brother and I watched helplessly numerous times as my mother was beaten and knocked unconscious as we dialed 9-1-1," Vincent told the Commerce committee. He described the difficulty of watching her struggle to get help and to say "no more."

His voice broke again as he described his pride in playing professional football and the "privilege, not a right" of wearing an NFL uniform.

He told senators that former Baltimore Ravens running back Ray Rice did not mislead NFL Commissioner Roger Goodell as the commissioner initially suggested. He also said that former FBI director Robert Mueller's NFL-hired investigation into the league's handling of Rice's case is expected "at any time."

"I didn't really find out until later on in life that a lot of my insecurities came from what was going on in my home, where my dad was abusing my mom," Torre said. "I was lucky I got to play baseball, so I had a place to hide. Not a lot of youngsters are that lucky."

Representatives from the major sports leagues--NFL, MLB, NHL, and NBA--and their players' unions were grilled by senators on the Commerce, Science, and Transportation Committee on their policies concerning domestic violence and its punishment. All touted their concern over domestic violence and the leeway of league commissioners to punish offenses as they see fit, even if an athlete believed to have committed an act of violence is not convicted in a criminal court. Senators made clear that they find the status quo unacceptable, several of them challenging the NFL's tax-exempt status as a trade-association-style group of individual teams.

On Friday, an arbitrator threw out the NFL's suspension of Rice, finding that Rice had accurately described his assault of then-fiancee, now-wife Janay Rice to the NFL. Goodell meted out an initial suspension of two games, but after video surfaced of Ray Rice's attack inside the elevator, Goodell suspended Rice indefinitely, claiming what happened in the elevator was "ambiguous" to him after hearing Rice's explanation.

"I don't think there was a need for a second video to impose the proper discipline. We failed in that particular area," Vincent said, acknowledging that, in his opinion, Goodell had all necessary information after his initial meeting with Rice.