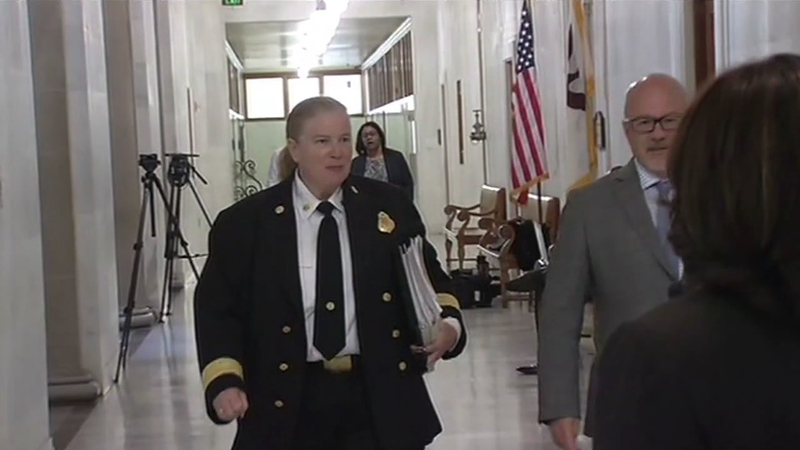 SAN FRANCISCO (KGO) -- An unprecedented meeting over San Francisco's Fire Chief ended Wednesday evening between the mayor and employees with the fire department. The groups are calling for the resignation of Fire Chief Joanne Hayes-White.

It has never happened before. The leaders representing various factions of the San Francisco Fire Department took a united stand late Wednesday afternoon as they walked into Mayor Ed Lee's office to deliver a letter they unanimously agreed to earlier this week, citing a "grave crisis of confidence in the direction and leadership of the current administration under Hayes-White."

"We had a very fruitful and frank discussion with the mayor. He heard all of our concerns he understands the gravity of the situation that the firefighters are facing," said Tom O'Connor, a spokesman for Local 798 Firefighters Union. "He understands that this is the first time that every single group in the San Francisco Fire Department has stood united and had one message."

Union leaders say the department is failing to meet its most basic mission of public safety, citing a shortage of ambulances and long wait times for an emergency medical response.

The chief says progress is being made with the addition of 35 EMTs on the streets since August.

ABC7 News caught up with Hayes-White heading into a meeting dealing with that very issue.

"We have work to do to rebuild the department after five consecutive years of reductions," Hayes-White said.

She wrote a letter last night to her 1,500 member department saying.

"I have moved this department forward and saying the attempt to force her out is an unfortunate distraction to the real issues," Hayes-White wrote.

Hayes-White said she will still lead with confidence and with support from the Mayor's office, despite some members of her department's resolution to have her removed.

The ultimate fate of the fire chief lies in the hands of the five member fire commission under a legal opinion by the city attorney's office. The commission may remove the chief on its own. The mayor can recommend removal, and the commission would have 30 days to respond to that request. They have a regularly scheduled meeting Thursday.
Related topics:
san franciscosffdsan francisco city hallbudgetasiana airlines flight 214 crashed leesan francisco board of supervisorsunionsambulance
Copyright © 2021 KGO-TV. All Rights Reserved.
RELATED
SF Fire Chief responds to calls for her resignation
I-TEAM: SF supervisor gives SFFD chief 'no confidence' vote
TOP STORIES
SF In-N-Out sends strong message against COVID vaccine mandate
Americans arrested for trying to board flight in Switzerland
Rain in Bay Area forecast for next 7 days
Vacation home renters targeted with threat, vandalism in North Bay
'Firestorm' tells Oakland Hills fire survivors' stories 30 years later
All counties in California now under drought emergency declaration
4-year-old survives fall off 70-foot cliff while hiking with parents
Show More
Lesbian pioneers pave the way for LGBTQ+ rights
Port of Oakland offers to help ease SoCal backlog
SF offering up to $100K for info leading to theft ring busts
Study suggests link between green space and COVID rates
How Walnut Creek restaurants are preparing for rainy week
More TOP STORIES News