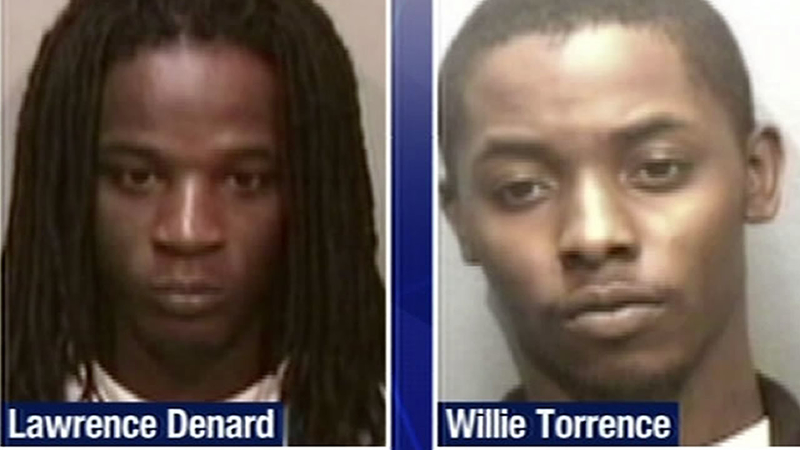 Two gang members get life in prison for boy's death

OAKLAND, Calif. -- Two popular gang members were sentenced Wednesday to life in prison for the fatal shooting of a 3-year-old boy and the wounding of two alleged gang rivals in a shooting in East Oakland three years ago.

Lawrence Denard, 29, and Willie Torrence, 25, were convicted last month of one count of first-degree murder and two counts of premeditated murder for the incident outside a grocery store in a strip mall in the 6400 block of International Boulevard at about 1:10 p.m. on Aug. 8, 2011.

Prosecutor Ben Beltramo said Denard fired at least 10 shots from a Glock semi-automatic pistol and Torrence was the driver, doing a u-turn so that Denard was in a good position to shoot at their gang rivals.

Beltramo said Denard and Torrence carried out the shooting in order to promote their gang, the 69th Village gang, and were targeting two members of the rival 65th Village gang, Robert Hudson and Jerome Williams.

The gangs originally were part of one large gang in the neighborhood but broke into separate groups in the 1990s and since then have engaged in many retaliatory killings, Beltramo said.

Some of the shots fired by Denard struck and injured Hudson and Williams but another shot hit and killed 3-year-old Carlos Nava, who was on his way to the grocery store with his mother and brother, according to Beltramo.

Carlos, whose death sparked widespread community outrage, was simply in the wrong place at the wrong time, Beltramo said.

In addition to convicting Denard and Torrence of the murder and attempted murder charges, jurors convicted them of two counts of discharging a gun from a vehicle, being ex-felons in possession of a gun and multiple clauses of acting to benefit a criminal street gang.

The sentencing hearing for Denard and Torrence took two days because the defense engaged in a flurry of legal maneuvering before Alameda County Superior Court Judge Jeffrey Horner could pronounce his sentence for them.

First, Torrence had a closed hearing on his motion to fire his attorney, David Byron.

Horner denied that motion, but then held a hearing in his courtroom, which was packed with supporters of Denard and Torrence, on their motions to postpone their sentencing because of potential new evidence they said would exonerate them and to be granted a new trial.

Carlos' mother, Maria Teresa Nava, said in a statement read in court today by Beltramo that she has lost much weight and suffered from diabetes, anxiety attacks and high blood pressure since Carlos was killed.

Nava said Denard and Torrence should receive the harshest sentence possible "so they will not be free to do this to another unfortunate family."

Horner said the prosecution's case against Denard and Torrence was "powerful, overwhelming and devastating" and statements Denard made in videos he recorded on his cellphone before the shooting were "the equivalent of a signed confession."

Horner said the videos show Denard holding a semi-automatic pistol similar to the one that was used in the shooting and saying he planned to murder his rivals and they should live in fear of him.

Horner sentenced Torrence to 114 years to life plus another 7 years. Torrence will first serve the 7-year term and then serve the 114 years-to-life term.

Horner said he chose to sentence Denard and Torrence to consecutive terms for their convictions instead of concurrent terms because there were numerous aggravating factors in favor of a maximum sentence and "simply no circumstances in mitigation" that would call for a lighter sentence.

Horner said one of the most important aggravating factors is that, "It's hard to imagine having a higher degree of cruelty and callousness than firing at least 10 shots from a semi-automatic pistol at unarmed and vulnerable victims in a crowded area in the middle of the day."

The judge said, "Carlos had no chance at all - he was in a yellow stroller pushed by his mother" and the boy's expectation that he was in a world of safety and loved "was ripped from him by Mr. Denard."

Denard's lawyer, Annie Beles, said during the trial that Denard should be found not guilty of murder because she doesn't think the prosecution proved that he was the person who fired the shots in the incident or even that he was present at the scene of the shooting.

Before Denard was sentenced today, Beles said she still thinks that Denard is innocent and his conviction is "a tragedy" and "a disservice to justice."

Beles claimed that Denard isn't a gang member and said the reason he has 69th Street Village signs all over his body is that he's proud of his neighborhood.

She said she believes Denard was convicted because of "cynicism and fear" and because of the emotional impact of a dead child.

The defense lawyer said, "The emotions that were played upon like a fine fiddle by the prosecution are what convicted him, not the evidence."

But Beltramo said, "I'm confident that justice was served and the right people were convicted."