Up to 30,000 Troops Needed for Syria Safe Zone, Kerry Says 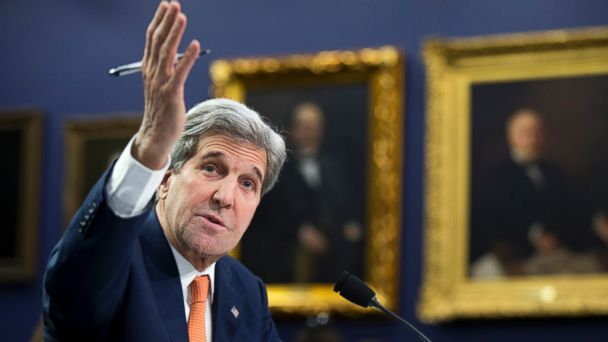 Secretary of State John Kerry said it would take 15,000 to 30,000 ground troops to maintain a so called "safe zone" inside northern Syria, citing previously unheard estimates provided by the Pentagon.

"Now are we ready to authorize that?" Kerry asked a Senate panel today.

Although a ceasefire is planned for this coming Saturday, there are growing calls within Washington for a so-called "Plan-B": options for military action if the truce fails. Many Republicans, including Donald Trump, are calling for a "safe zone" in northern Syria to protect the increasing number of displaced people.

Kerry said today that creating a safe zone isn't as simple as it sounds. In addition to controlling the airspace, Kerry said, a large troop presence would be required to shield the population from ISIS attacks on the ground.

"All this talk about safe zones does not go through the process of what it really means," Kerry said.

"Our Pentagon estimates that to have a true safe zone in the north of the country you may have upwards of fifteen to thirty thousand troops. Now are we ready to authorize that? Are we ready to put them on the ground?"

Aside from the inherent physical and political risks of putting a large number of U.S. troops on the ground inside Syria, the U.S. worries about potential conflicts with Russia, which is also conducting an aerial bombing campaign over Syria. Creating a no-fly zone would most likely mean the U.S. would have to enforce that rule against Russian jets -- a potentially dangerous scenario.

Nevertheless, Kerry said that the U.S. is considering other options if a ceasefire can't be reached inside Syria.

Yesterday during testimony in front Senate Committee on Foreign Relations Kerry said it will be two or three months before the U.S. will know if Syrian President Bashar al-Assad and Russia are serious about a political transition process. If they're not, he said, "'Plan B' options are being considered."

Facing backlash from Senate Republicans who suggested President Obama has been unwilling to act in the past, Kerry said it would be a "mistake" for anyone to think the president won't act this time around. "He has a record of making tough decisions," Kerry said.

Officials say that other options being discussed should the ceasefire fail is increasing America's covert support for the Syrian opposition groups. Officials insist that these are only discussions and no real "Plan B" is cemented.

In late November, the Wall Street Journal reported that the Obama administration was pressing Turkey to send additional troops to seal its border with Syria. Pentagon officials estimated that it could take as many as 30,000 troops to seal the border on the Turkish side to enable a broader humanitarian mission. A U.S. official confirmed to ABC News that the estimates were developed as part of an assessment several months ago.

In early December, Defense Secretary Ash Carter told the Senate Armed Services Committee that the Pentagon estimated that the ground force needed to enforce a safe zone in northern Syria would be "substantial."

"What's an appropriate force of that size to protect a zone of that size. In our estimate, it's substantial," said Carter. "And again, I don't see, much as I wish otherwise, anybody offering to furnish that force."