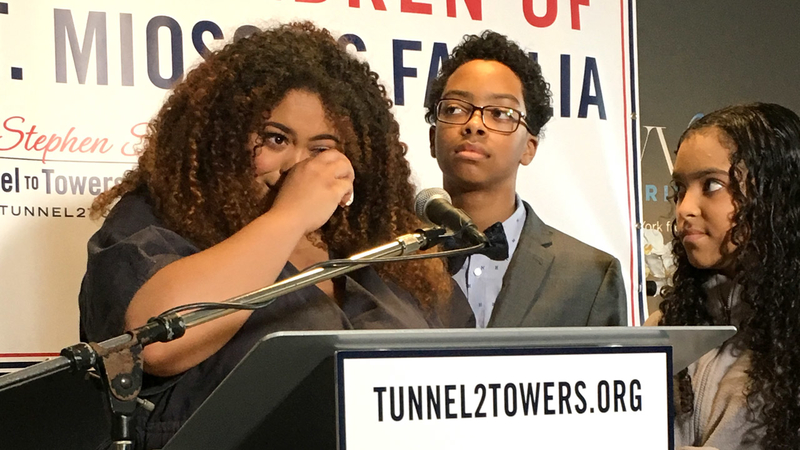 RIVERDALE, Bronx -- Five months after the murder of NYPD Detective Miosotis Familia, her grieving children are speaking out publicly for the first time.

"Love and kindness are never wasted."

Those words, from the Chairman of the Tunnel to Towers Foundation Friday, Familia's three children given a new home, debt-free. They will be able to move in, just in time for Christmas.

"We know life can change in a minute," the foundation's chairman, Frank Siller, said.

Familia, of the 46th precinct, was shot and killed by an emotionally disturbed person, Alexander Bonds, back on July 4th weekend in the Bronx. Her murder gripped the hearts of New Yorkers, because the 48-year-old officer was a single mother of three, who had also cared for her own elderly mom.

She was the first female New York City Police Department officer killed in the line of duty since the September 11 attacks.

The Tunnel to Towers Foundation, which to date has raised more than $4 million for new homes of slain first responders, raised $492,000 for the Familia children. The Daily News contributed another $263,000 and Skyview in the Hudson, where they will be living, donated another $125,000.

Familia's eldest daughter, Genesis Villella, was moved to tears as she thanked everyone, standing with her 12-year-old brother, Peter Vega, and his twin sister, Delilah. Genesis, who is 20 years old, has postponed college for now, to take care of her younger brother and sister.

"Something our mom always made sure was that we were well taken care of," she said. "She was the one who kept us afloat. She used to tell us that because she was a single parent, that we shouldn't feel less fortunate, or that we couldn't live the life that we wanted."

"I can't change the past. I can only look forward and be prepared for the future," Villella added.