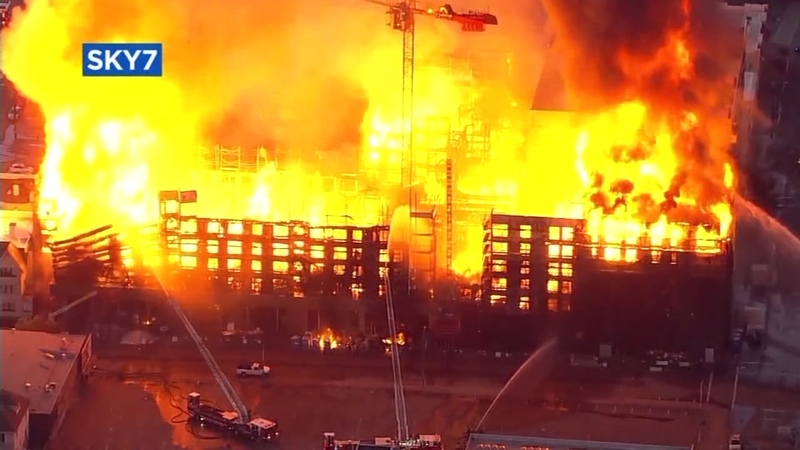 Residents near Oakland fire not allowed home until crane removed

OAKLAND, Calif. (KGO) -- An apartment building being constructed in Oakland went up in flames Friday morning, pushing hundreds of neighbors out of their homes.

They won't be allowed to return until crews remove a burned crane that could collapse.

Crews are ripping down the burned scaffolding of the building, reducing it from seven stories to just one in a few hours.

The four-alarm fire on Friday morning became a raging inferno, destroying the apartment building under construction on Valdez Street.

A giant crane spun out of control above the smoke and flames.

"It was a sad day for Oakland, still is," evacuee Sarah Tyack said.

Tyack is one of the residents displaced by the fire who are waiting for word that they can go back home.

"We're being told as soon as the crane comes down we can go home," Tyack said.

The Oakland Fire Department says it has a plan to remove that unstable crane.

"It's an excavator we will be using with two cables in area we want to bring down the crane," Oakland Fire Department Battalion Chief Zoraida Diaz said.

After the crane is dismantled, nearby homes must be inspected for smoke and fire damage. Many of those inspections won't happen until Sunday.

Saied Haddad is frustrated about the lack of information he's getting from the city. "We like to know when it's okay to go back home. Power has been cut to our apartments. Think of the implications of that."

Federal arson investigators are joining local teams to search for a cause, and are reviewing surveillance video at the construction site.

"My gut tells my it's arson," Tyack said.

Some in Oakland are anti-development, and anti-gentrification.

"We have a housing shortage. People are against development, I don't agree with that," Tyack said.