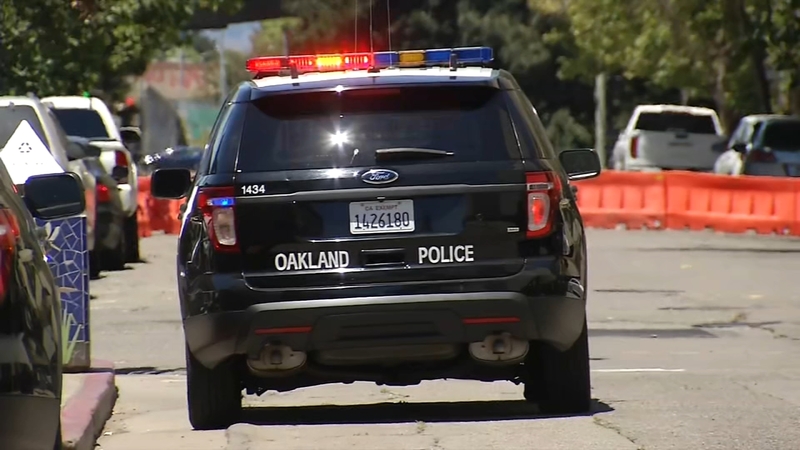 OAKLAND, Calif. (KGO) -- Oakland's City Council has voted to reallocate money away from the police budget.

More than $17 million will be diverted from the police to violence prevention and other services not involving police. Another $3.6 million will be put into the new MACRO program which will basically be a civilian crisis response program within the Oakland Fire Department addressing those in mental health crises.

"We celebrate this historic budget," said Minister Cherri Murphy of the East Bay.

A majority of Oakland's City Council and many community members are praising the move.

"This is a historic moment we should mark this day June 24, 2021," said Oakland District 2 councilmember Nikki Fortunato Bas.

The money that would have gone to fund the police department will now be redirected and double funding for the department of violence prevention.

"We will have violence interrupters in our streets and neighborhood," said Councilmember Bas.

But as crime has soared in Oakland where we have seen six mass shootings this year alone, some say now is not the time. In fact, the two councilmembers against this now approved plan are those that represent East Oakland where crime rates are highest.

"The question is not if we move forward in reimagining public safety, the question is how fast we move and whether or not we have the safety net in place for when our residents call so that someone will answer the call," says Oakland District 6 councilmember Loren Taylor.

Oakland Mayor Libby Schaaf opposes the decision and believes this could take 50 officers off the streets and lead to longer 911 response times. Something echoed by the Oakland Police Officer's Association president.

"As I sit here right now there are 180 calls standing in Oakland waiting for a police officer and apparently that status quo is acceptable and having even more waiting time going forward is going to work out," says Oakland POA president Barry Donelan.

Councilmembers in support though say police will still respond to violent crimes.

"Priority one calls in progress are top priority, they are still top priority and will get a response asap that will still happen, some of these lower-level things that may be smaller level things or no crimes at all, they may take a lot longer," says Oakland District 1 councilmember Dan Kalb.

The cut means there will be only four police academies over the next two years, instead of the six academies Mayor Libby Schaaf wanted.

In a statement released to ABC7 News, Mayor Schaaf called out the six council members who voted for the cut:

"The budget passed today by the Oakland City Council makes bold investments to reimagine public safety through violence prevention and non-police strategies that I strongly support.Unfortunately, it also cuts 50 police officers who respond to Oaklanders' 911 calls and enforce traffic safety. It also cuts much-needed future academies, which will significantly reduce police staffing and delay response to Oaklanders in their time of crisis. It will force our officers to work even more overtime shifts, which are expensive and unsafe for officers and residents alike.

I believe that until we have proven alternatives, we cannot destroy Oakland's current public safety system at a time when we are losing so many to gun violence. I commend Councilmember Loren Taylor for offering a measured compromise that would have funded all the new investments to reimagine public safety while still preserving the basic police services our residents rely upon, including Ceasefire, which has been proven to reduce gun violence.

It is difficult to understand why Councilmembers Bas, Fife, Gallo, Kaplan and Thao voted against Councilmember Taylor's proposal (moved for a vote by Councilmember Treva Reid) that maintained all their new investments and would have preserved the basic public safety response our most vulnerable Oaklanders rely on in their most traumatic times of need.

Our community is suffering and unfortunately, the impacts of violence and trauma are falling more heavily on communities of color in East and West Oakland. My office will continue to work in partnership with the Department of Violence Prevention and the Police Department to interrupt the cycles of violence affecting our city. We will also aggressively seek out the resources announced by President Biden yesterday to address the horrifying increase in gun violence that our city and many others are experiencing right now."

At Oakland's Lake Merritt, community members insisted the county use COVID relief funds for healing and education in Black and Brown neighborhoods.

"Invest in strategies that we know will heal Alameda County residents who are overrun by trauma in our communities," said Pastor Michael McBride.

Tuesday, family members could be seen hugging as they remembered Da'Shawn Rhodes, who was killed in a shooting at Lake Merritt.

A wave of gun violence included a weekend shooting near a Juneteenth celebration at Lake Merritt.

"Even the police chief said himself if there were 100 officers or 200 officers it would not have prevented the violence. The way we would have prevented that is getting to those young people when they were teenagers, investing in them at the start," said Councilmember Bas.

The issue of funding more police or funding more violence prevention programs is at the heart of the debate over Oakland's police budget. There are usually four police academy graduations each year. The mayor called for six and other council members called for five. Speakers brought that up during Thursday's virtual public comment session.

"Without a fifth police academy that Taylor has proposed, Oakland's police force will shrink faster than the alternatives can be put in place to offload the work," said Cathy Adams with the Oakland African American Chamber of Commerce.

As for preventing violence, those who were formerly incarcerated and then trained as violence interrupters or neighborhood change agents in cities like Richmond and Stockton, and worked with troubled youth were able to greatly decrease gun violence and assaults according to a study out of UC Berkeley.

"It helps really heal from the trauma that young people have experienced in these neighborhoods and through that healing it reduces the inclination to use a gun and to engage in violence," said Professor Jason Corburn who is also the director of Cal's Center for Global Healthy Cities.

One idea is for funding to be redirected to trained fire department response teams so that they can better respond to 911 calls for mental health. It's a complicated formula.